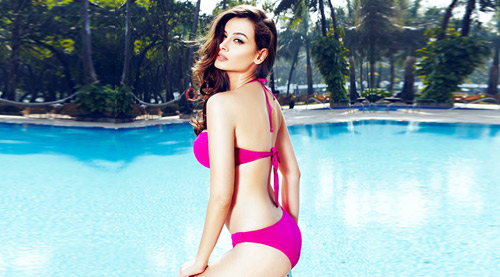 Her sizzling appearance in 'Aaj Blue Hai Paani Paani' [Yaariyaan] continues to make many skip a beat. Though Kuch Kuch Locha Hai was atrocious, she actually boasted of an almost equal screen time as Sunny Leone. And now, after making her presence felt in successful films like Yeh Jawaani Hai Deewani and Main Tera Hero, Evelyn Sharma's big moment has arrived with Ishqedarriyaan where she is making her debut as a solo leading lady. With Mahaakshay Chakraborty opposite her, Evelyn is starting an altogether new chapter by turning into a simple small town girl, hence taking an about turn from her glam image.

Ishqedarriyaan - From the very title itself, one gets an impression of a beautiful love story, isn't it?

This is my first solo lead film and I am happy that it is for a full-on love story. The film is about a rich boy (Mahaakshay) who can have everything that money can buy. He is a good person at heart who comes from the US to Himachal Pradesh. There he meets this girl, which is me, who doesn't have money but still lives a simple life quite happily in a village. He falls in love with her, his whole life changes, and eventually he just wants to make her happy.

When he asks her about that one wish, being a simple girl she just wants to sort out her life, which is to get married to another guy in town, Arjun. He is put into this situation where he love her so much that he wants to do everything for her, even if that means leaving his own life behind. Being a selfless person, he now wants her to meet this guy. That is the interval point. What happens next forms the crux of the film.

How does your pairing with Mahaakshay work out in the film?

I guess people are complementing our pairing. We had to work well to make it come across as beautiful on screen. As long as people understand my character and in the end root for the boy and girl, I will be happy.

Since this is your first ever true-blue love story, it must have been a different experience altogether for you as an actress, right?

It was really awesome. I have done mostly comedy movies which I love and I am still doing. However for my first solo lead, I wanted to choose a story which connects with all my Indian fans. I think a simple love story speaks to everyone. We are a generation on WhatsApp with all these smiley faces. Now a days everyone wants to have the love of his life, but how many are there who are willing to sacrifice their love for someone? Ishqedarriyaan brings back a simple love story on screen. It is a departure from love stories that you see today which are very selfish at heart.

How did you work on getting the entire body language, facial expressions and mannerisms changed for the film, since you have a naughty on-screen image otherwise?

Yes, this film is a different genre and though I have stepped into a romantic zone with Yaariyaan as well, it was more of young and masala film. On the other hand Ishqedarriyaan is a realistic kind of drama where all songs too are there to tell a story. Yes, I had to do something different as acting is in a completely new space here. I had to make sure not to go over the top and instead play on a natural side. See, you learn as you grow. I have done six films by now, so it was not a big challenge for me to step into a different avtar for the film. The challenge was to find Indian element though.

That must have been tough for you, considering you are an NRI?

I am an NRI who has lived in Germany. To come and play a village girl in Ishqedarriyaan was a challenge. This is where my producer and director played a very important part in grooming me well. I had to do workshops, meet a lot of local girls, experience a lot of local language and find my roots in Punjab and Himachal Pradesh.

So after Ishqedarriyaan, is it going to be a goodbye to your naughty roles?

I still love my naughty image and I am not trying to change it. I want to be versatile as an actress. After Ishqedarriyaan, I would be seen in roles where I carry my image from the past. In fact it is a great thing to have an image. We all have it. This is something that people visualize you in. Why not benefit from it?