After an extensive shooting schedule and a packed promotional spree, Housefull 4 is finally a couple of days away from its release. The makers, who have shot in London, Mumbai and Rajasthan, had arranged a pan-India promotional plan and the actors traveled to different cities to promote their film. Finally, last night, it was time for the actors' families and Bollywood friends to watch Housefull 4 in a special screening. And, Bobby Deol was late! 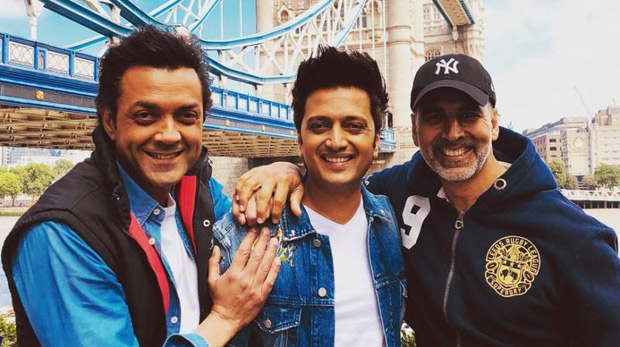 You can trust Akshay Kumar to churn out an element of humour from almost any given situation. He and co-stars Riteish Deshmukh, Pooja Hegde and others came up with a hilarious video. In it, Akshay calls Bobby 'Punctuality Ka Badshah' , saying that he had to arrive by 8 pm, it was 8.40 pm and Bobby was nowhere around. Watch it below!

Bobby, wherever he was, must have rushed to the venue after seeing that video!

Housefull 4, also starring Chunky Panday, Johny Lever and Rana Daggubati in other roles, is a reincarnation comedy wherein all the characters will be seen playing double roles. Directed by Farhad Samji, the film releases on October 25, and will clash with Rajkummar Rao and Mouni Roy's Made In China and Taapsee Pannu and Bhumi Pednekar's Saand Ki Aankh.

Disha Patani sizzles in a brown bikini for a…

Exclusive: "Should I love Vicky Malhotra or…

Avneet Kaur sets the internet on fire in…