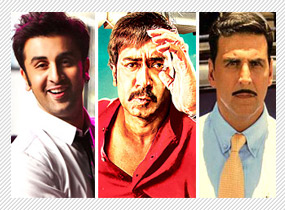 The first half of 2013 is over. Its monsoon time. And it's raining hits in Bollywood with film after film crossing the success barrier. And Rakeysh Omprakash Mehra's astounding biopic Bhaag Milkha Bhaag already seems to have the potential of being the first certifiable blockbuster in the second-half of 2013. Here's looking at the films of 2013 so far that made it, and the ones that didn't.


Yeh Jawaani Hai Deewani:Ayan Mukerji's second film was charming warm and sometimes tender. But it didn't have much to say about the man-woman thing, except that guys who are popular in college can get away with murder in future life. And yes, girls who are repressed just need to throw off their spectacles and make a spectacle of themselves to prove they have reached that nirvanic stage of liberation that Waheeda Rehman so memorably expressed in 'Aaj Phir Jeene Ki Tamannah Hai'. These characters lived and died only for themselves. Thanks to Ranbir Kapoor's growing popularity, the film escalated to beyond the 100-crore profit mark leaving everyone including producer Karan Johar stumped. Ayan Mukerji couldn't handle it, he took off to Spain.


Aashiqui 2: Stars sell, right? Then how do we explain the phenomenal success of this Mohit Suri's musical drama about a girl who wants to be Lata Mangeshkar, a guy who wants to be drunk all the time and a relationship that hits a dead-end just when the hero hits the bottle with enhanced vengeance? Audiences loved the story of a girl who is willing to give up her fame for love. This film turned Aditya Roy Kapoor and Shraddha Kapoor into saleable stars. Hic hic hurray!


Race 2: Well-toned girls and guys dancing, drinking, gambling and conning one another is all I remember of this year's first blockbuster. Deepika, John and Saif Ali Khan added glitz, glamour and star-value in this dazzling show of skin...sorry skill.

Raanjhanaa: By far the most deserving success of the year so far. Aanand Rai's Varanasi-based love story gave us an unlikely couple in Sonam Kapoor and Dhanush. It also gave us a love story which made obsessive passion more a crime of the heart than a libelous offence. The film's exuberant celebration of love took filmy romance away from the metropolis into the heartland. We could say, this film was the romantic antithesis of Yeh Jawaani Hai Deewani. Other USPs: A R Rahman's best music in Bollywood since Dil Se and Taal and a new awakening for Sonam.


Jolly LLB: Subhash Kapoor's astonishingly well-written film on the loopholes of the legal system was a delight. There were no stars in the film. There were Arshad Warsi and Boman Irani who are far more gifted than some of our A-listers who do the same thing over and over again. A true triumph of a relatively small socially relevant film worthy of a standing ovation.


Special 26: Here was superstar Akshay Kumar doing what he seldom does, playing a real-life con-man and that too in an ensemble cast where at least 15-18 other characters got equal prominence. Director Neeraj Pandey broke all the rules of mainstream cinema. The heist story was unadorned by half-naked girls swimming in a sea of champagne. He still got audiences hooked.


Other successes of the first-half of the year: Remo D'Souza's ABCD (India's first dance-reality show as a feature film), Abhishek Kapoor's Kai Po Che (boys will be boys saga with an outstanding performance by Raj Kumar Yadav), Tigmanshu Dhulia's Saheb Biwi Aur Gangster Returns (took the tale of an unfaithful wife into the realm of the rugged and the ruthless where guns and the sound of Lataji's 'Lag Ja Gale' mingled miraculously), Chashme Buddoor (critics frowned at what they saw as a desecration of Sai Paranjpye's classic comedy, but the audience laughed uproariously, and the director David Dhawan laughed all the way to the bank), Shootout At Wadala (Sanjay Gupta's comeback film was a mean violent saga of gang wars done at a sound-defying octave), Mrighdeep Lamba's Fukrey (funnier than any other comedy this year so far), Raj Nidimoru and Krishna DK's Go Goa Gone (Bollywood's first official zombie tale where Saif Ali Khan went blonde).

David: Bejoy Nambiar's brilliantly-crafted tale of three unpredictable men who share the same name, Tamil star Vikram, Neil Nitin Mukesh and newcomer Vinay Virmani were brilliant in each of the three-layered stories. Finally though the failure of David proved episodic films just don't work in any part of the world.


Himmatwala: Film historians are still trying to figure out why Sajid Khan decided to remake an awful 1983 film which even Sridevi who starred in the original, would like to forget. To cut a long and tedious story short, the audience decided to give the film what one of its songs famously and picturesquely describes as 'Bum Pe Laat'.


Rangrezz: This one definitely deserved better. A rugged expertly-executed film about love and elopement in a small dusty towns where guns speaks louder than words, Rangrezz was a fine film. Just why it didn't work remains a mystery. It couldn't be due to Jackky Bhagnani's minimal star-power. Aditya Roy Kapoor was no star when Aashiqui 2 was released. Maybe Jackky should have gone into the film after a few strong pegs of the hard beverage.


Matru Ki Bijlee Ka Mandola: We were warned by the eccentric title to expect something entirely unconventional. Vishal Bhardwaj took us into a la-la-land where Pankaj Kapoor turned into two different personalities before and after drinking. Moral Of The Story: not every film with a tipsy hero is capable of becoming an Aashiqui 2 or a Yeh Jawaani Hai Deeewani.

Aurangzeb: A superbly crafted variation on Yash Chopra's Trishul about cut-throat competitiveness in corporate sectors, fuelled and sur-charged by the brilliant performances of Rishi Kapoor, Amrita Singh and Jackie Shroff, Aurangzeb suffered a setback at the box-office because director Atul Sabharwal took up a massy subject and executed it in Shyam Benegal's style. Nahin chalega, boss.


Other notable thuds of the year so far: Ram Gopal Varma's The Attacks Of 26/11 (yet another flop from RGV's factory), Kanan Iyer's Ek Thi Daayan (a judiciously brewed witches' tale with a glorious performance by Konkana Sen-Sharma, that lost its way in the second act), Prem Raj's Ishkq In Paris (Preity Zinta's comeback film fell flat on its polished face), Yamla Pagla Deewana 2 (tch tch, the legendary Dhamendra had to suffer this humiliation for his sons' sake!) and finally Rajkumar Gupta's Ghanchakkar....need we say anything more?!