On August 15, to commemorate the occasion of Independence Day, B-town will be seen celebrating the patriotic theme in theatres. Gold featuring Akshay Kumar and Satyameva Jayate featuring John Abraham, Manoj Bajpayee and Aisha Sharma will be releasing! The teams of both films are currently promoting their respective ventures and recently the team of Satyameva Jayate had an interesting chat with our site Bollywood Hungama. 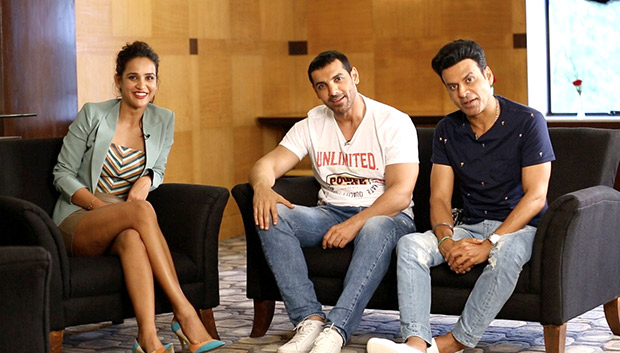 In our exclusive interview with John Abraham, Manoj Bajpayee and the Bollywood debutant Aisha Sharma, there were some interesting responses given to some equally intriguing questions. During one of the segments, the stars were taken aback when they were questioned, ‘What would you gift our Prime Minister Narendra Modi?’ For the same, the two actors definitely had some quirky some answers.

In fact, the first response that left everyone a tad bit dumbstruck was that of Manoj Bajpayee. The talented actor replied, “Chewing Gum.”  Obviously this left the others around in splits. Furthermore, Manoj went on to add, “I mean I would gift him and say Please sir time pass karo aap. Matlab bahut jyada koi busy rehta hai toh unko kahenge na aap bahut busy rehte ho toh aap jyada kuch mat socho aur yeh le lo!” [Please Sir do some timepass. As in, for someone who is so busy, we would gift it asking them not to think too much about things and have this chewing gum].

After the laughter died down a bit, John Abraham responded that, “I think I would gift Mr. Modi Parmanu to watch.” To which Manoj immediately added, “I would gift him the DVD of Satyameva Jayate just to see the angst of the people growing and they are tearing tyres. So please correct the corruption issues that persist in the country. So that the Achhe Din truly comes by.”

Directed by Milap Zaveri, Satyameva Jayate deals with the ongoing problems like molestation, corruption and other issues and the battle of a man against the system.