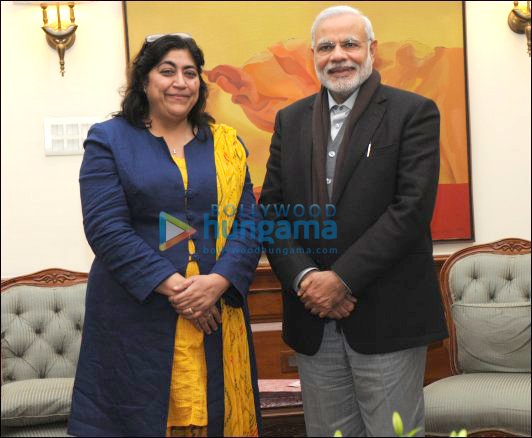 
Now this week on Thursday morning the Prime Minister made time in his busy schedule to meet British-Indian filmmaker Gurinder Chadha with regard to her proposed film on Lord Mountbatten.


Apparently Mr Modi, a keen student of history, wants the bio-pic to project a fair picture of the events that led to the Partition of India into two nations and the hand played by Mountbatten in that historical division.


Says Gurinder, "Yes, I met Mr Modi. He was extremely gracious. He blessed our project. He was very interested to hear my take as a British Indian director on the Partition and Independence."


Language was apparently a problem since the Prime Minister prefers Hindi while Gurinder is more at home in British angrezi.


Says the acclaimed director, "We spoke for a while. As he prefers to speak in Hindi, I did my best to hold the conversation about the whole film in my own version of the language, a Hindi/punjabi mix!"


Says Gurinder, "He was quite amused but appreciated my efforts! I told him I was going to make the sequel to Attenborough's Gandhi but from my perspective as someone raised abroad but whose grandparents were from Jhelum and Rawalpindi. My co-producer Deepak Nayar was also with us and spoke about his experiences."