Russo Brothers’ highly anticipated film The Gray Man has been making headlines ever since it was reported that the Tamil actor Dhanush will also star alongside Hollywood actors Chris Evans, Ana de Armas, and Ryan Gosling. The film had its Los Angeles premiere on Wednesday with the entire cast and the directors in attendance. 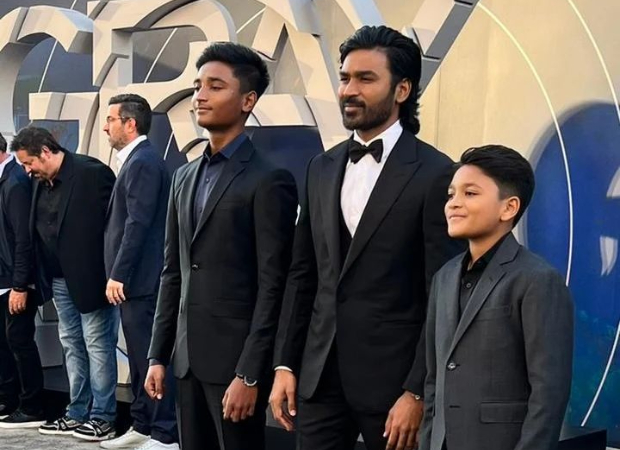 Dhanush was in attendance at the premiere of The Gray Man in Los Angeles with his two sons Yatra and Linga at the TCL Chinese Theatre. The actor shared photos with them, all three dressed in black suits. Dhanush admitted that his sons stole the show. "When you realise they have completely stolen the show from you. At The Gray Man premiere with Yathra and Linga," Dhanush wrote and added white heart emojis while sharing pictures.

Chris Evans was so happy to see Dhanush at the premiere and the moment went viral.

#Dhanush with the entire cast of #TheGrayMan ❣️

The Gray Man is CIA operative Court Gentry (Ryan Gosling), aka, Sierra Six. Plucked from a federal penitentiary and recruited by his handler, Donald Fitzroy (Billy Bob Thornton), Gentry was once a highly-skilled, Agency-sanctioned merchant of death. But now the tables have turned and Six is the target, hunted across the globe by Lloyd Hansen (Chris Evans), a former cohort at the CIA, who will stop at nothing to take him out.

The Gray Man arrives on July 22 on Netflix.