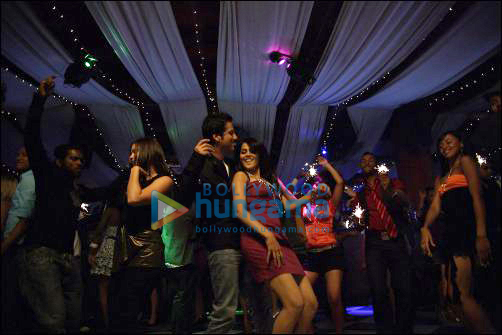 They say that 'Old habits die hard', which was true in the case of the bubbli-cious Genelia D'souza, who was shooting for a song titled 'Teri Meri Ye Zindagi' from her eagerly anticipated film Life Partner. One of our most reliable sources said, "While Genelia was shooting for the said song, she requested the choreographers to include the signature step of 'Pappu Can't Dance Saala'!" Our source also added, "Everyone constantly keeps telling Genelia how popular the song is and that she grooved so well in the video. So while shooting for this song, Genelia requested Bosco-Ceaser, the choreographers, to include the step. They were taken a back but understood that it was a sentimental thing and let Fardeen and her dance to the step."

Genelia D’Souza does the ‘Pappu’ dance step in Life Partner

When asked about the co-incidental similarities, a surprised Genelia exclaimed, "Oh my God! I was really surprised to notice the similarities. And I was telling the Life Partner team, that everyone will think that it was planned like this. I am very excited and looking forward for the release of Life Partner, it is almost one year and I have had no release. So I'm looking forward to all the pre-release excitement and promotion."

All in all, one simply hopes that Jaane Tu... rubs off its Box-Office magic on Life Partner too! Genelia, we are sure, would more than agree to this.