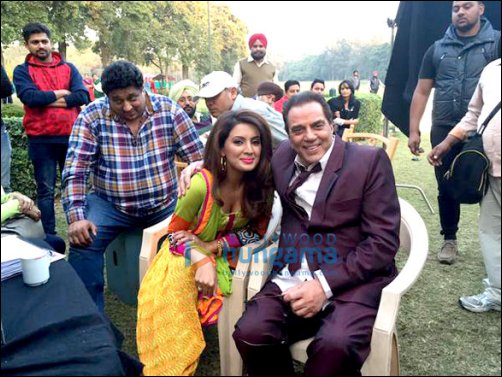 It is a known fact that Narmada Ahuja, daughter of Govinda, has finally started shooting for her debut Hindi film Second Hand Husband where she has Punjabi star Gippy Grewal for company. Well, there is more to the film now. She would be joined by Geeta Basra who is another leading lady in the film.

"Director Smeep Kang, who is also debuting in Bollywood after making a few successful Punjabi films, and Geeta were in touch for quite some time. While Narmada was on for the film, the hunt was on for the other leading lady. This is when he thought of Geeta. In fact it was an overnight decision as Geeta was roped in 24 hours after she returned from an overseas holiday. It was all of a sudden and soon Geeta found herself in Jalandhar shooting for the film," informs our source.

In the film, Geeta plays a pucci Punjabi kudi, an opportunity she could never get earlier despite being a hardcore Punjabi.

"She would be seen in traditional attire and would have a quintessential Punjabi lingo," the source adds, "In fact her part in the film is modeled on that of Sridevi's characterization in Judaai where she played a headstrong dominating woman. Of course since Second Hand Husband is a comedy, everything would be on a lighter note. She has a very critical part in the film along with Gippy Grewal, though for obvious reasons she can't go into the details as of now."

The film also features Dharmendra in a key role and Geeta has already filmed a few scenes with the legendary actor. Thrilled, she also posted a picture of theirs on Twitter.

On contacted, Geeta confirmed the news, "Yes, there is always something good waiting to happen for you at the right time. I have done a cameo (Mr. Joe B Carvalho) and a dance number (Zila Ghaziabad) in between but a meaty role was something that I was really looking forward to. I am glad Smeep thought of me for Second Hand Husband. More than anything else, I am excited that I can put on my Punjabi attire this time around. Otherwise most of the times I am required to go overtly stylish in Western attires. With this film, I can now show that even traditional wear - if worn well - can make heads turn."