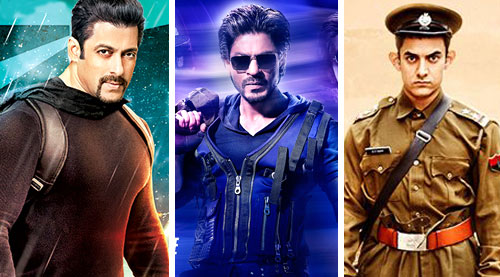 After this phenomenon called '100 crore club' pretty much found a member each amongst all the reigning superstars, the next obvious question was - 'Is it time for 200 crore now?' After all, Aamir Khan had made it possible with 3 Idiots and Dhoom 3 while Shah Rukh Khan had achieved the feat as well with Chennai Express.

Now in 2014 which has seen only two 200 crore affairs so far (Kick, Happy New Year), for industry at large, it is a matter of fingers crossed while it awaits the release of PK.

Says distributor and film business analyst Girish Johar, "PK is the kind of film which could well go to even 250 or 300 crore as it promises good content along with entertainment value. The names attached to the film are credible too."

"If one talks about footfalls and compare them with yesteryear's blockbusters, you would see there is such a huge gap between count of people who have saw the films then and now," adds trade expert Atul Mohan, "Now with every big release we witness rise in screen count and/or hike in ticket price etc but then all these are tactics to make big money in short time. Anyways, we still have Aamir Khan coming to crease with PK That should conclude 2014 on a high."

Considering the fact that PK is a festival release and is looking at added advantage of Christmas falling in its second week, all eyes are on this factor to further facilitate its movement into the 200 crore club.

"That helps, though at the cost of sounding immodest, Kick was not even released on a holiday," smiles Rajat Arora, co-writer of Kick, "The film released on a regular Friday and Eid came later. What helps a film bring in audience is the packaging, which really worked for Kick as everyone just went wow when the trailer came out. The First Look of the film matters because if as an audience you get a feel of 'Oh, I have seen it and done all', the game is over for on Day One itself."

He goes on to add, "This is the reason why more than just the holiday factor, it is the content that is bound to work for PK. I am sure it will definitely cross 200 crores. Of course there is Raju Hirani factor too."

So while Bang Bang, Singham Returns, Jai Ho, Holiday, Ek Villain, 2 States are some of the other 100 crore entries this year, all eyes are on Aamir Khan to open the gates for 200 crore affairs. He did that last year too but the expected flurry of double centuries wasn't quite there in 2014. While this has only went on to prove that 200 crore is not quite a cakewalk, at least as yet, one hopes that things start changing for the better from 2015 on.