The nominations for 66th Filmfare Awards 2021 are here. Like every year, the award show will felicitate those who gave tremendous performances on screen and off screen in 2020. Though the year was one of the toughest years owing to the pandemic, the film fraternity left no stone unturned in order to entertain their fans with their stories. The magic of the movies remains untouched whether it was a big screen release or a digital one. The Best Actress category is quite a tough one. 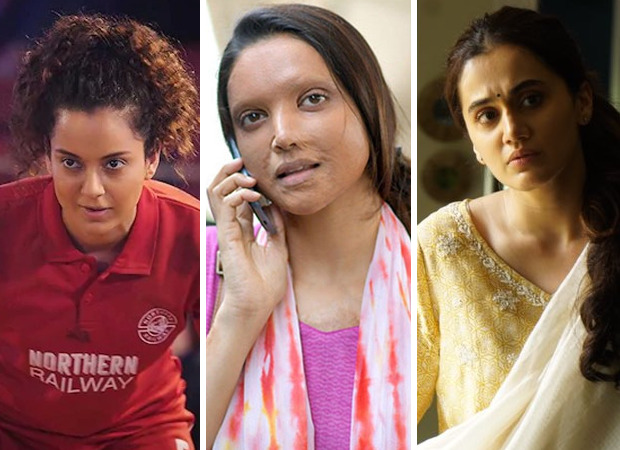 While all have the chances of the winning the Best Actress Award, it has once again become a battle for the three actresses – Deepika Padukone, Kangana Ranaut and Taapsee Pannu. The beef between the latter is known to all. There are political differences but also Kangana has often called Taapsee ‘sasti copy’ (cheap copy). There’s been a lot of back and forth between the actresses during 2020. During an interview with a news channel, Kangana was heard calling Taapsee Pannu and Swara Bhasker B Grade actresses. Responding to that and without naming Ranaut, Taapsee had taken to Twitter to react saying, “Maine suna class 12th n 10th ke result ke baad humaara result bhi aa gaya hai! Humaara grade system ab official hai ? Abhi tak toh number system pe value decide hoti thi na #MaLifeMaRulesMaSh*tMaPot." (I heard that after classes 12 and 10, our results are also out! Are we officially following the grade system too? Before this, we were graded on numbers, right?).”

Last year, after Sushant Singh Rajput’s death, the debate of the treatment around outsiders have begun and how nepotism takes away the opportunities from well deserving candidates. Around that time, Kangana had made various remarks at Kangana. Taapsee had spoken to Bollywood Hungama in which she said, “All this mocking because I refuse to sing her (Kangana’s) tune and because I refuse to see her as the flag bearer for outsiders. Sorry, we outsiders all are not bitter people. We all have had good and bad experiences. But a lot of us outsiders in the film industry refuse to let negativity drive us. It’s our positivity hope and the ability to make lemonade out of the lemons thrown at us that has gotten us to where we are.”

During the same time, Deepika Padukone was using her platform to talk about mental health after the tragic death of Sushant Singh Rajput. While it was said the actor was on depression medication for a while, the actress had spoken up on why it is important to talk about depression. Kangana Ranaut had once again taken a jibe at Deepika when the case of Sushant’s death went to CBI. "Repeat after me, depression ka dhandha chalane walon ko public ne unki aukat dikhadi #CBIforShushant #SushantSingRajput #1stStepToSSRJustice," wrote Kangana in one of her tweets. She then went all out targeting her and stated in one of her tweets, “If people like her get their way they will put every extra ordinary individual in asylum, this illness has no diagnosis based on blood reports or body scans, anyone can gather a blood thirsty mob and declare one a psycho and get them lynched,stop using mental illness so loosely." Though Deepika never responded to any her tweets, Kangana has often continued to make remarks at her.

While there are 5 actors in the Best Actress category, all eyes are on Deepika Padukone, Kangana Ranaut and Taapsee Pannu. All three of them have given phenomenal performances but given their baggage, it is safe to say the Filmfare Awards will be quite an interesting watch. Knowing that Kangana Ranaut has been awarded Best Actress for Manikarnika – The Queen Of Jhansi and Panga at National Film Awards this year, it won’t be a quiet showdown for sure.