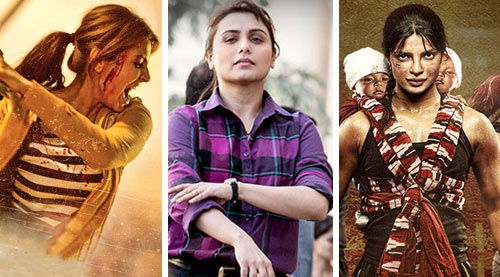 During the climax of Navdeep Singh's NH10, Anushka Sharma lights up more than just cigarette. With smoldering intensity, she beats the villain to a pulpâ€¦ And then some moreâ€¦ Raising questions of the female hero assuming the man's position.

Here's listing 10 films that showed the woman using her muscles to be mean and macho in the climax to combat the villain.

1. Rani Mukerji in Mardaani: In the bloody climax of the film, it's just Rani Mukerji and her adversary Tahir Bhasin fighting it out fist to fist. As per the demands of the script, Rani beats the child-trafficking villain to a pulp. As per convention, this was a revolutionary role reversal.

2. Sushmita Sen in Samay: She played a single mother and a gritty cop tracking down a serial killer. At the end of the film, it was just Sush gunning down Jackie Shroff. Creepy.

3. Shilpa Shetty in Dus: In Anubhav Sinha's awful cops-and-robbers tale, Shilpa Shetty played 'one of the boys' which meant essentially, that she learnt a few martial arts moves to look convincing as a woman in a man's job.

4. Priyanka Chopra in Mary Kom: She played the real-life pugilist with just the right punches and by the rules of the male-dominated sport even getting bashed up to a pulp in the boxing ring.

5. Sridevi in Army: Watch the splendid Sridevi take on Danny Denzongpa in the bloodied climax of this Sholay rip-off. This was a classic case of gender reversal with the Thakur from the original transforming into a vendetta-seeking houri out to avenge her husband Shah Rukh's death.

6. Shabana Azmi in Bhavna: As a woman, who would do anything to protect her child, Shabana's character knifes her own husband (Marc Zuber) in one of the most astonishing avatars of 'Mother India' ever attempted.

7. Madhuri Dixit in Anjaam: She beats her tormentor Shah Rukh Khan to a pulp in the climax before plunging to her death, revenge for her murdered husband complete. It's a man's world force-occupied by the female hero.

8. Raakhee in Shradhanjali: As a woman defending her family against the villainous Suresh Oberoi, Raakhee played the avenging 'hero' long before it became fashioned for heroines to kick ass.

9. Tapsee Pannu in Baby: Boy, did she give Sushant Singh the beating of his life! As a secret agent grappling a suspected terrorist, she took on the villain without the hero's help, beating the sh..t out of him. Way to go, Tapsee.

10. Anushka Sharma in NH10: Smoldering with an unspoken rage, Anusha as a woman who has nothing to lose, goes on killing rampage against her husband's killers. Revenge never looked sexier.