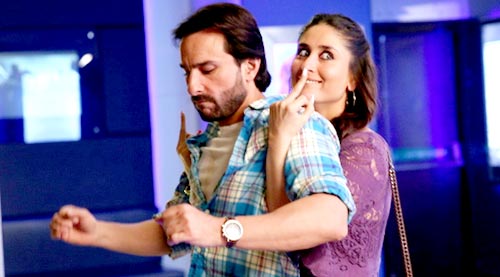 Actor Saif Ali Khan has an unusual cameo for wife Kareena Kapoor Khan in his production Happy Ending - she plays his girlfriend who ditches him,

reportedly, after giving him a tight slap! As Saif puts it, they are not in a hurry to work in full-fledged leads now, because as a couple it would be too much to be together both at home

as well as on the sets all day!

Recently, it was also revealed that Aditya Pancholi plays stepfather to his own son Sooraj Pancholi in his debut film, the remake of Hero. Last year, Rishi Kapoor and Neetu Singh

played a cop couple that wants to adopt Ranbir Kapoor's character as their son in Besharam! And Ranbir's facial similarity his mom on screen made it look quite odd, so much so,

in fact, that we expected the climax to reveal that he was their long-lost son!

Hindi cinema has been far richer in real-life kin playing roles different from their actual relationships. With physical resemblances coming in, this may look sometimes odd, but

filmmakers do not really care when they feel they have the right roles for them, or the correct script in their hands!

Witness how odd it looked when Dharmendra, in a cameo, essayed a character unrelated to Sunny Deol, the hero, in Saveray Waali Gaadi. Or when Sunny himself produced

23 March 1932 - Shaheed, in which he played Chandrashekhar Azad to Bobby Deol's Bhagat Singh!

And while Amitabh Bachchan and Abhishek Bachchan have co-starred as father and son often enough, they have also played unrelated characters in Bunty Aur Babli (which

clicked), Jhoom Barabar Jhoom and in two more films in which they never shared a frame - Shootout At Lokhandwala and Ek Ajnabee, in both of which Abhishek

only made small appearances.

To the Bachchan duo, however, also goes the unique honour, thanks to the ingenuity of director R. Balki, of being cast in reverse roles, with Abhishek as father to a Progeria-afflicted

The Kapoor capers
The Kapoors, by their sheer strength of numbers in showbiz, have obviously been cast in roles completely different from their real persona all the time! The story began when Raj

qawwals in cameos in the Pradeep Kumar-Geeta Bali film (Geeta was Shammi's wife!) in the 1961 Jabse Tumhe Dekha Hai.

Shammi Kapoor also made a cameo as a truck driver in Shashi Kapoor's Salakhen (1976), while Raj Kapoor played the title-role of Vakil Baboo (1982) wherein Shashi

Kapoor was a murder accused! Virtually, then, the only film in which the brothers played real brothers was the 1981 Naseeb, in which Raj and Shammi appeared as themselves

Randhir Kapoor and Rishi Kapoor carried on this Kapoor 'tradition' when they played half-brothers in Housefull 2 (2012). The former also was the maternal nephew of his

paternal uncle Shammi Kapoor in Mama Bhanja (1977), besides the two playing unrelated cameos in Dev Anand's Censor. Rishi himself was cast as Shashi Kapoor's son in

being 'related'! In Prem Yog, Shammi played Rishi's father, while it was only in Prem Granth (also co-produced by Rishi) that Shammi actually play chacha to him!

Then we had the classic case of Ramesh Talwar's Doosara Aadmi (1977), in which widow Raakhee falls in love with Rishi Kapoor only because he bears a slight

resemblance to her dead husband (played by Shashi Kapoor) and she feels that he is 'back'!

And if this in a way highlighted the subtle but superficial similarity between the uncle and nephew in real life, Rajiv Kapoor's wannabe image of being a similar look-alike actor following

in his uncle Shammi Kapoor's celluloid footsteps was underscored by them playing son and father in the 1983 Ek Jaan Hain Hum.

Finally, Shashi Kapoor and his children Kunal Kapoor and (in a cameo) Sanjana Kapoor were not connected with each other in Utsav (1985).

The Khans and more
We also add the laughable twin examples of a bald Feroz Khan playing don in two films to Fardeen Khan's (unrelated but looking so similar!) hero - Janasheen (2003) and Ek

Khiladi Ek Haseena (2005). The former, which did modest business, at least had the redeeming angle of the don wanting to leave his riches to the hero because he looked like his

But the most ridiculous example of familial resemblance sent for a toss came in the 1970s - with Joy Mukerji and Deb Mukerji playing friends in Ek Baar Mooskura Do! A similar

conceptual faux pas was when Aamir Khan and Faisal Khan, so obviously siblings, were cast as friends in Mela (2000).

The Khans (Salman, Arbaaz, Sohail) were not heavily similar-looking by that token, and so we were amused in the right way when Arbaaz Khan played the strict and fierce brother of

And while the three Khans played unrelated men in Maine Pyar Kyun Kiya (2005), with Arbaaz in a blink-and-miss cameo, Salman and Sohail Khan were almost never brothers in

the many films they did together, like Hello, Heroes, Main Aurr Mrs Khanna, Salaam-E-Ishq and God Tussi Great Ho.
Rahul Khanna played the lead in Deepa Mehta's 2003 Bollywood/Hollywood, in which his brother Akshaye Khanna played himself in a friendly appearance and shared frames

with him. Shilpa Shetty and Shamita Shetty too were strangers in Fareb (2005), while Mithun Chakraborty played a senior CBI officer to son Mahakshay Chakraborty's cop in the

In an unusual case, Shruti Haasan was 14 when she played Sardar Patel's daughter in her father Kamal Haasan's production Hey Ram, in which he played an archaeologist.

Shaadi ke Side-Effects!
Of course, blood ties were not the only casualties in such castings - bonds created by matrimony were also cast aside without any hesitation whenever 'needed'.

Sridevi and producer Boney Kapoor married in 1996, but by then, Judaai, the last film together of the popular pair of Anil Kapoor (Boney's brother) and the actress was being

produced by film. The film released in 1997 - with Anil and now sis-in-law Sridevi playing husband and wife!

And finally, Dimple Kapadia was Akshay Kumar's mother, not mother-in-law in the actor's co-production Patiala House in 2010.

The Unique Twist
Many of our stars, as child actors, played childhoods of family members, like Imran Khan, who played his uncle Aamir Khan as a kid in both Qayamat Se Qayamat Tak (1988) and

Tanuja was sis Nutan's bachpanaa (as she put it) in Hamari Beti (1950), Shashi Kapoor played elder brother Raj Kapoor's character as a child in Aag (1947) and