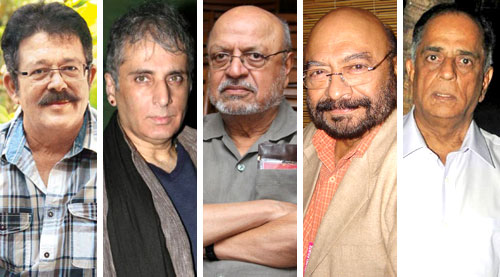 Kunal Kapoor (son): "Dad chuckled when I told him about the award. I am very happy and proud."


Aditya Raj Kapoor (Shammi Kapoor's son): "A handsome gift to an extremely handsome man. I was an assistant to Raj Kapoor Saab in Satyam Shivam Sunderam. And I remember no one in the unit, male or female, could take their eyes off Shashi Uncle. He used his divine looks and stellar performances against one and all to embellish movie history with his remarkable presence."


Shyam Benegal (director of the Shashi Kapoor productions Junoon and Kalyug): "I am absolutely delighted. But this award could have come sooner. Shashi's contribution to both cinema and theatre have been immense."


Govind Nihalani (director of the Shashi Kapoor production Vijeta): "The Dada Saheb Phalke award to Shashiji is most eminently deserved. It is not just for his splendid performances but also for his genuine commitment and contribution and support to Indian cinema of refined content, aesthetics and human values."


Pahlaj Nihalani "Shashi Kapoor is the only person from the film industry outside my family whom I've co-produced a film with. The film was Chor Sipahee in 1977. Shashi said to me, 'Your film with me is the only one that has given me any profits.' We couldn't produce any more films together. Shashi got too busy as an actor. I remember he was shooting for four films simultaneously at Filmistan studios. He would change his shirt and move from one set to another. Shashi has had an amazing career as an actor. He started as child in Awara, did his first film as hero in Dharmputra when he was a teenager, then moved to films like Jab Jab Phool Kile in the 1960s, Fakira and Chor Machaye Shor in the 1970s. I worked with him in three films. He was and he is one of his kind."

5 Times when Rishi Kapoor teamed up with…

After the demise of Rishi Kapoor, Karisma…