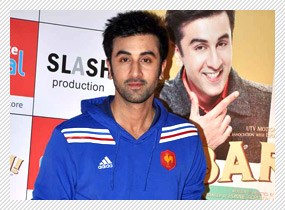 There are some actors for whom an oft repeated question being asked around their debut is - 'Will he/she turn out to be a superstar?' And then there are some who are termed as superstars even before they have canned their first ever shot in Bollywood. Though for many a newcomer it is only about seeing a journey up from a certain position, in case of these select few superstars, it is about maintaining the position they have found themselves in and then continuously proving themselves film after film. There can't be any faux pas or false move at all. Everything has to be just perfect at every step and there is no breathing space whatsoever for an actor.

Ranbir Kapoor is one such actor.

Here is presenting Part I of the special feature.

Belonging to the first family of Bollywood, Kapoors, Ranbir was being closely scrutinized once he was out of his teens. There were some candid pictures of the actor, most likely clicked in a party or some other social do, which started making the rounds even before he had signed his first film. His illustrious parents (Rishi Kapoor and Neetu Singh) were asked this question practically every month - 'Beta kab hero ban raha hai?' It was a period of waiting and watching as YouTube also revealed clippings of one of the short films that Ranbir had shot for one of his friends from the industry.

It was known there and then that this boy would be a star, no let me correct it, superstar one day. Saawariya just proved that and even though everything about the film was questioned, scrutinized, challenged and ridiculed, the only person who came out unscathed was Ranbir Kapoor.

This was the first step in the right direction for the superstar.

When released, Saawariya was termed as a 'blue film' due to this being the only colour that one saw on screen. Leaving aside its poor content, the film had many other issues to worry about. First and foremost was its offbeat theme that was just the kind of disastrous beginning that a newcomer could have hoped for. A love story that was not really the one, Ranbir found himself trapped in a set up where he got good opportunity to perform for the classes but lost out on making an impression amongst the masses.

Secondly the film's music too wasn't the kind that one associates with love story of star debutants. There wasn't anything 'dhinchak' for Ranbir here as he found himself on the sets that were totally cut off from reality. Well, literally, as no one till date knows about the period or country of the film's setting.

Thirdly, and very importantly, the declaration made by Shahrukh Khan that his Om Shanti Om, which was releasing on the same day, would destroy Saawariya was like the final nail in the coffin. With the 'Baadshah' on a high and his film being much superior as well when it came to commercial quotient, it was death knell for Ranbir's Saawariya already.

The film opened decently but went downhill soon after. There was nothing that audience took home except for Ranbir's earnest performance. Not many amongst the masses noticed him though but at least the industry bigwigs were now well aware of the young man's acting talent.

Bollywood saw a future for Ranbir and though the obvious temptation for him would have been to sign multiple films in one go, he refrained from doing so. This pretty much established that not just Papa Kapoor was pretty much making sure that his son didn't take a false step ahead; even Ranbir had a thinking head over his shoulders.

Ranbir knew at this stage that he wasn't going to repeat the Saawariya mistake again. The 'mantra' was to find an 'audience connect' and also come across as someone who is 'a hero'. The film was Bachna Ae Haseeno and though there was a risk factor involved here as well, considering the grey shades that his character carried, the film continued the consistent run of the director Siddharth Anand.

Chartbuster score by Vishal-Shekhar also helped Ranbir find that 'audience connect' as his dance on the title song coupled with 'Khuda Jaane' became a rage. The film also paired him with Deepika Padukone along with Bipasha Basu and Minissha Lamba. Though the film wasn't a smash blockbuster, it was a good success nevertheless. Also, it was a sigh of relief for the industry in general as it knew that money could finally ride on Ranbir's name.

Ranbir still continued to wait and surprised quite a few by doing Wake Up Sid where he had an unlikely pairing with Konkona Sen. Directed by a first timer Ayan Mukerji, the only consolation factor that resulted in some good vibes for the film was the name Karan Johar attached to the project. The film had a publicity campaign that was different from the routine, the songs were again set in a classy mode and Wake Up Sid didn't quite seem like a 'safe venture'.

However, to everyone's surprise, this medium budget film didn't just open quite well but also found flavour amongst the target audience - youth. Ranbir's first clean hit and that too in a setup which wasn't quintessentially Bollywood, Wake Up Sid established quite firmly that Ranbir wasn't shying away from experimenting while keeping commerce in mind.