The beautiful actress Urmila Matondkar has been in Hindi cinema for almost three decades now. From child actor to becoming a sensation, the actress has been witnessed all kinds of fame in her career. As Ram Gopal Varma’s Rangeela completed 25 years on September 8, Urmila Matondkar went down the memory lane to talk about the significance of the film. 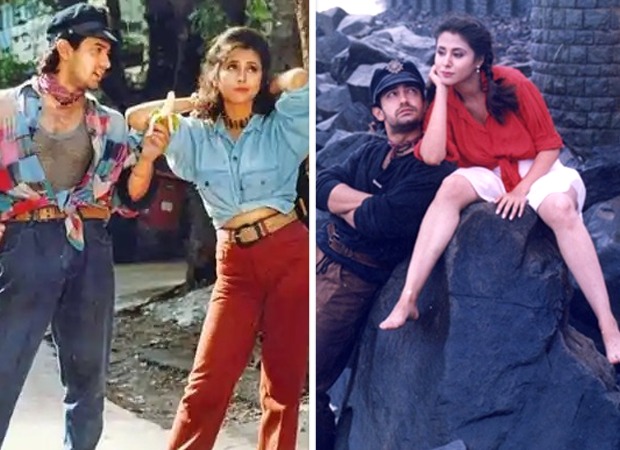 Speaking of Aamir Khan who played her best friend and love interest Munna in the film, Urmila recalled the restaurant scene where Aamir was wearing a yellow shirt and how the scene came out to be. “When we were shooting the scene and Aamir had an amazing scene, imagine how my reaction is supposed to be like that ‘This guy is your friend and even I am little awkward coming to this big restaurant’. There are few scenes in Hindi cinema that are so realistic and completely crazy, it resonates and that is why they are so funny.”

She further added, “Aamir was so crack and cute at the same time in the scene. I was trying to stop myself from laughing and rest of the time, I was trying to act. But, that’s Aamir Khan for you.”

Urmila recalled how Aamir Khan owned the character of Munna so well that you could feel his emotions. “There have been so many moments in Rangeela and because he is such a perfectionist, we would do a lot of rehearsals. These were very helpful to both of us because there was constant super timing that needed to be maintained as the way we are fighting and talking to each other. The chemistry of Milli and Munna, for that we would rehearse a lot and that has reflected on screen. Once he picked up that role, he just played it so well. The song ‘Pyaar Yeh Jaane Kaisa Hai’ was picturised on me and Jackie Shroff. But, the sequences that featured Aamir, it really reflected like someone really hurt your heart. I think, for me, it is the ultimate internalisation of the pain and the grief he is going through while he was thinking that he has lost the girl he loved,” she said.

She further recalled how she wrote a fan mail to Aamir Khan during the dubbing session as she was already a fan of him from his movies Qayamant Se Qayamat Tak. “So, I was dubbing in Sumeet Theatre and when you dub the film, you go through the film several times. The day my dubbing was going to wrap up, I asked for a paper from assistant. Then, I wrote a fan mail to Aamir.  I wrote that - ‘After this film, a lot of people will praise you but I just want in humble way be the first one to tell you that you are beyond awesome in this film. You have made ‘Munna’ a legend through this film. I just wanted to tell you that’.”

“He was going to come to the theatre after me to dub the film. Then, I left the note on the same table and I had left already. I thought I would be very awkward and I wouldn’t be able to tell him all these things on his face. I forgot to ask him whenever we met, ‘Did you get that letter and do you know I was the first one to praise you?’ It was absolutely awesome. It was a pleasure. The guy’s ability, his passion for cinema, acting, whatever he plays, just precedes him. It just takes over his entire life at that moment,” Urmila Matondkar said.

Also Read: Urmila Matondkar on Rangeela: “Aamir Khan was so CRACKED & CUTE at the same time it was not even…”