With the COVID-19 pandemic bringing about an environment of uncertainty and gloom, Zee TV recognizes the need of the hour to spread cheer amongst its viewers with its first fiction offering post lockdown. The channel is all set to introduce a refreshing comedy of errors that will get families together and make them laugh with its engaging light-hearted narrative. The situational comedy, titled Ram Pyaare Sirf Humare, follows the life of a young woman Dulari (Jyoti Sharma) and her 'prize catch' of a charming husband - Ram. 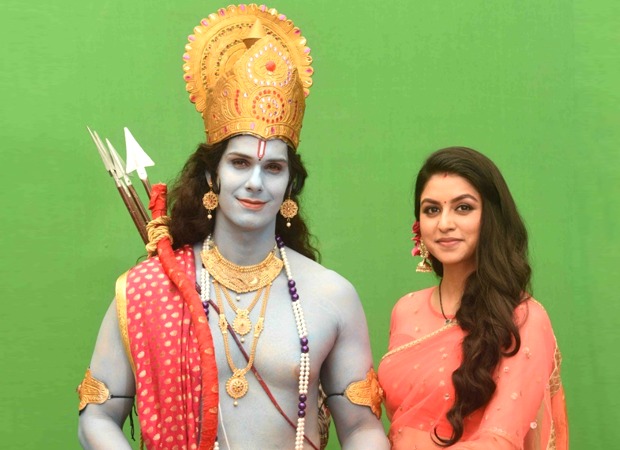 Essaying the role of Maryada Purushottam - Ram, popular television actor Nikhil Khurana recently took the avatar of Lord Ram to depict the essence of his character while shooting for the promo of the show. Adding a contemporary twist to his role, he was seen driving a scooter with his wife in this very same avatar. As easy as the appearance might have looked, the actor had to undergo a rather a rigorous routine to get into the avatar.

Speaking about his look, Nikhil said, "It took me a minimum of 3 hours to step into that avatar while my makeup and hair team worked in full force to paint my entire body. Personally, I am not someone who really likes to dress up a lot and often avoid any extensive makeup routines, but this was a hard resist. It took equal number of hours to get into the avatar and out of it, and this wouldn’t have been possible had I not been an actor. I believe it's the beauty of an actor's profession that they get to don a variety of looks which brings along a new and exciting experience as well.”

The plot of Ram Pyare Sirf Humare revolves around the strikingly handsome Ram who runs a beauty parlour in Bhopal and while he provides the best beauty services in town, women also visit the parlour to gawk at him. Ram who doesn’t give in to the flirtations coming his way, Dulari sees other women flirting with him as ‘Surpanakhas’.  To ensure she keeps her man safe and away from the clutches of these surpanakhas, Dulari uses several tips and tricks to keep Ram close to her as she rightfully says, "Ram Pyare, Sirf Humare!" She gets the nuskas to keep her husband to herself from a book given to her by her brother Patang and though she hilariously ends up creating trouble for Ram and herself every single time she turns to the book, she doesn't give up.