Last Updated 18.08.2022 | 10:11 PM IST
feedback language
follow us on
Bollywood Hungama » News » Bollywood Features News » EXCLUSIVE: Ranveer Singh reacts after Samantha Ruth Prabhu says she has been ‘Ranveer-ified’ on Koffee With Karan 7: ‘I appreciate her as an artist immensely’

The season 7 of Koffee With Karan kicked off on Disney+ Hotstar with Rocky Aur Rani Ki Prem Kahani stars Ranveer Singh and Alia Bhatt followed by actresses Janhvi Kapoor and Sara Ali Khan as guests in the second episode. The third episode saw Akshay Kumar and Samantha Ruth Prabhu who brought lively potboiler of glamour, secrets and witty one-liners. One of the common talk points were how they have been Ranveer-ified. 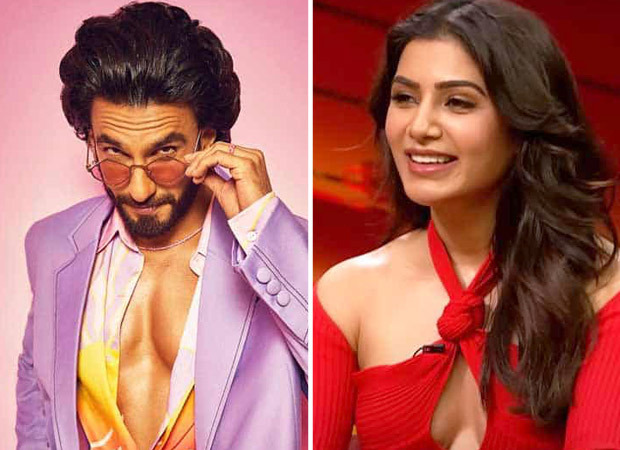 EXCLUSIVE: Ranveer Singh reacts after Samantha Ruth Prabhu says she has been ‘Ranveer-ified’ on Koffee With Karan 7: ‘I appreciate her as an artist immensely’

During the rapid fire session, Karan Johar asked Samantha Ruth Prabhu, "If you were hosting a bachelorette party, which two Bollywood hunks would you hire to dance?" She replied, "Ranveer Singh and Ranveer Singh."

Samantha was asked, "If you were cast in a love triangle with Akshay Kumar, who is the second male actor you will pick," to which she said, "Ranveer Singh. You know, yesterday I shot an ad with him and I am Ranveer-ified completely. A fan for life," she said.

In an interview with Bollywood Hungama, Ranveer said, "Hopefully, we'll have a more in-depth collaboration in the future because I think she is a wonderful person, a very warm person, lovely energy, and an immensely talented person. We did an ad film together. There's where we met and engaged for the first time. It's on that day that she said that ‘Hey I'm actually shooting for Koffee With Karan tomorrow’.”

He added, “I appreciate her as an artist immensely and even more so as a person, even one to one she's so lovely, she's so warm, she's light-hearted, she's humourous and it's wonderful that through advertising one is able to connect to one's co-actors. Hopefully, I'll do a full-fledged feature film with her in the future.”

On the work front, Ranveer Singh will next star in Rohit Shetty’s Cirkus, releasing on December 23, 2022. Following which, he will star in Karan Johar’s Rocky Aur Rani Ki Prem Kahani and Shankar’s Anniyan.

ALSO READ: Ranveer Singh and Deepika Padukone walk the ramp for Mijwan 2022 and it is dreamy and romantic