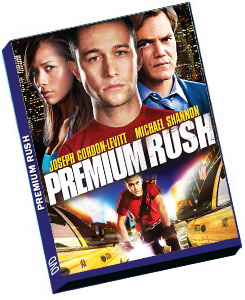 Premium Rush is an edge of the seat, thrilling joyride that takes a look at the life of bike messengers in NYC who risk their lives daily riding up and down the busy streets of Manhattan hand-delivering urgent packages.

Wilee (Joseph Gordon-Levitt) is one of the fastest bike messengers in NYC who gets an adrenaline rush from his high risk job of delivering packages on a high priority basis. He believes in 'No-Brakes' policy which does make him among the most sought after bike messengers. His life takes a drastic turn when one fine day he is asked to deliver an envelope to China Town. Little does Wilee know that this particular delivery mission would probably be the toughest task of his career. The moment Wilee gets ready to deliver the envelope, he is confronted by a grumpy NYPD officer Bobby Monday (Micheal Shannon) who is hell-bent on snatching the envelope from him for mysterious reasons. Now Wilee must somehow dodge the NYPD detective and deliver the courier to its concerned owner and this is what forms the remainder of the story.

The USP of Premium Rush lies in it's superbly directed bike chase sequences that leave you awestruck. The way Wilee navigates his bike through peak rush hour Manhattan traffic has to be seen to be believed. Director David Koepp's slick and stylish treatment makes the proceedings highly enjoyable though the culmination to the story could have been more impactful.

Performance wise Joseph Gordon-Levitt yet again proves that he is among the finest young actors of the present generation. Michael Shannon plays the antagonist to the hilt. Dania Ramirez, as Joseph's love interest, is decent.

The film's duration is 87 minutes

The Starting Line- This section takes a behind the scenes look at how David Koepp came up with this story revolving around bike messengers. It also features interviews with other key members of the cast and crew including Joseph Gordon-Levitt and Michael Shannon.

Behind the Wheels- An interesting action and stunts featurette that takes you behind the scenes of filming the deadly bike chase sequences. It shows you how Joseph trained to ride a bike and also shows you how a specialized team of bike messengers was hired to add authenticity to the over all feel

Premium Rush is a highly enjoyable and exciting flick mainly for its superbly directed bike chase sequences. If you missed watching this one on the big screen, picking up the DVD wouldn't be such a bad idea. At less than 90 minutes, it does keep you entertained and hooked for most parts.