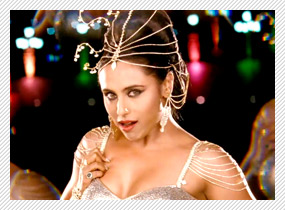 Aiyyaa is making news for reasons more than one. Just when it seemed that the film may get trapped in racism row, the song 'Dreamup Wakeupum' has caught further attention for its lead pair Rani Mukerji and Prithiviraj.

“‘Dreamum Wakeupum’ is a tribute to South films” – Rani Mukerji

"In front of 'Dreamup Wakeup', it seems as if 'Ooh Laa Laa' from The Dirty Picture was a kindergarten affair. What had seemed scandalous about Vidya Balan's act in the film has been taken to a different level by Rani. In a career lasting over 15 years, she has never done something like this and even for her most loyal fans, this is nothing less than shocking", comments a filmmaker.

On her part though, Rani is glued to the feedback coming the song's way and feels that instead of being called as a spoof, it is more of a tribute to the South Indian films.

Says Rani, "Don't read too much into 'Dreamum Wakeupum'. After all, this girl is just trying to understand the 'pyaar ki bhaasha' for her lover and is just singing in a language which she feels is Tamil. It is actually a tribute."

How about the wild steps that she is dancing to? After all she has never been seen so 'bindaas' before.

"Arrey, credit this to my friend and choreographer Vaibhavi Merchant. We have collaborated so many times earlier too and when we are at home and are doing all this 'masti', we do indulge in such dances. You have to see it to believe it", winks Rani, "Now we are just bringing the same fun element to the audience. Vaibhavi has done so many South films as well and is conscious about not offending anyone here."

We concur as well.