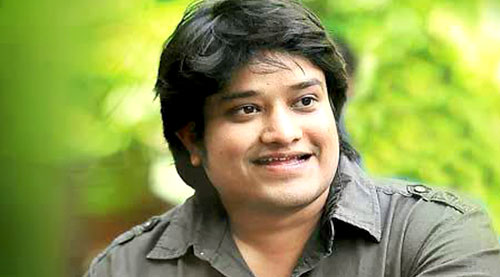 His grandfather was Pandit Shivram, who composed music five and more decades ago for films, though big-time eluded him as most of them were either devotional or mythological movies. His father, known as Bhagwan Shivram, worked as a musician for big names like Laxmikant-Pyarelal, R.D. Burman, Jatin-Lalit and even Himesh Reshammiya. Many of Divya's uncles and aunts are also into music, notably aunt Jaishree Shivram and uncles Jugal Kishore-Tilakraj, who composed music in the '80s.

"We are Rajasthanis in origin, but based in Mumbai for decades," says Divya. "I have learnt a bit of music by observing my father and grandfather. When I was eight years old, my mother came to know that I had a flair for music and was playing on drums. So she took me to Kalyanji-Anandji."

The duo's training was invaluable, declares Divya earnestly. "While the late Kalyanji-bhai imbibed immense discipline and taught us timing as well as the finer nuances of playback, Anandjibhai would teach us how to hold the audience interest and other vital aspects."

Divya was always fond of rhythm and he stayed long with the duo, performing with them around the world in the duo's popular troupe, Little Wonders. "My vocal chords changed at the age of 16 into my adult voice, and that was the stressful period, because one can never predict whether a singer's voice would remain. Nourishing the voice with riyaaz became a must," points out the singer.

However, the seeds of the artiste within him were indeed deep. "Even in those live shows, I had a special fondness for rustic or folk-based songs and qawwalis, like 'Mere Desh Ki Dharti' or 'Hamein To Loot Liya'.

The '90s was the era of what Divya calls the "70 mm hero's voices! Everyone was typecast, and a song meant for Sukhwinder Singh, for example, would never be given to Sonu Nigam. But soon things changed," he notes.

The only pinch that Divya feels today is that though audiences welcome new talent more now, they cannot really differentiate between true singers and mere performers. The "de-typecasting", so to speak, is welcome, says Divya, but not the excessive gimmicks.

But the singer lauds his generation for their different approach and frank helpfulness. "Priya Panchal, singer and lyricist who is now Priya Saraiya, is a childhood friend, and she suggested that I meet her husband Jigar and his partner Sachin."


Progress was gradual. "Besides assisting Sachin-Jigar for more than three years, a parallel door that opened for me was singing jingles for Shankar-Ehsaan-Loy and their World Cup anthem 'De Ghumaake' that I sang with Shankar," recalls Divya.

Divya's film debut happened with the 2012 Ishaqzaade for Amit Trivedi, who was impressed by the jingles. "He just called me for a recording one day - at Yash Raj Studios. For me, it was like getting into a land of dreams! I have grown up watching Shah Rukh Khan movies, so often produced by the banner, and it felt so unreal to be there! The song he gave me was Hindi cinema's first dub-step song - 'Aafaton Ke Parinde'."

Amit also gave Divya more songs - 'Shubhaarambh' from Kai Po Che! and 'Allah Meherbaan' from Ghanchakkar. And then came what many consider to be Divya's real breakthrough, 'Maston Ki Jhund' from Bhaag Milkha Bhaag under S-E-L again. "I had sung in a high pitch for them for the Coke Studio Season 2 song 'Dil Loche' in a truly high pitch and they called me. I was terribly nervous, but they put me at ease and told me, 'Tension mat le (Don't be tense)!' They even told me that I had to enjoy the song and that my slightly nasal voice would be perfect!"

With Sachin-Jigar, the break came later. "As their assistant and a singer of their scratches, I could not ask them for songs," explains Divya. "But I did ask Jigar whether he could keep the song 'Chanchal Mann Ati Random' from Shuddh Desi Romance in my voice, as it was a Rajasthani number. Luckily, Adi-sir (Aditya Chopra) loved my voice and suggested that they retain it!"

Divya Kumar has also recorded for Pritam in Shaadi Ke Side/Effects. "I have a very old bond with him!" he announces. "I was just 8 when I sang seven songs in his first CD, which was a children's album. And he was pleasantly surprised to meet me as an adult and I reminded him that I was the same kid!" Sajid-Wajid and Salim-Sulaiman are others for whom he has recorded so far, and he mentions that Jazzy B calls him for high-pitched songs. But the singer's dream is, of course, to sing a song for Shah Rukh Khan.

As someone with a rich lineage and a panoramic view of the music industry, we ask him what he thinks are the pros and cons of today's music scene. Thoughtfully, he says, "There are so many good people working here, par bure bhi hain! The best part about today's music and musicians is their willingness to experiment and try out new things in both music and voices. The bad thing is that fresh and natural voices lose out to fake and novel ones," he says candidly.