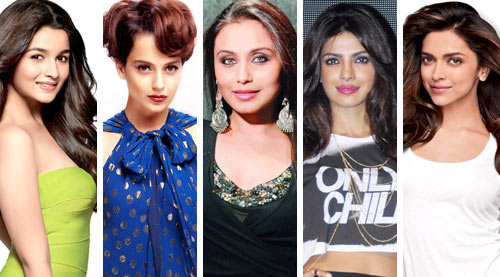 There were several films in 2014 where the female lead played the hero. But the ones who displayed more balls than usual were few and far-between. These are the ladies who made a difference (in order of priority).


1. Alia Bhatt: Three hits Highway, 2 States and Humpty Sharma Ki Dulhaniya in 2014, plus a gritty short film where she showed the world why girls need not be afraid to go out alone in the dark. All this, plus a video where the spirited 21-year old took potshots at herself...Alia Bhatt is a star with spunk.


2. Kangna Ranaut: In both Queen and Revolver Rani, she was cast as unsophisticated girls who go out into the world to find their bearings. And so what if they fall flat on their face? Kangna wasn't afraid to look ridiculous. A fearless feisty femme fatale. But the question is, now what? Would future roles offer Kangna the same opportunity to broaden the bandwidth of the Hindi film heroine?


3. Rani Mukerji: Just one film in the last two years, and she was the queen of the ball(s). Mardaani showed Rani wearing the pants cussing, bullying her colleagues and heckling the criminals. As a cop searching for the kingpin of a flesh racket she was convincing as long as she didn't get down to physically bashing up the villain.


4. Priyanka Chopra: Mary Kom found Priyanka Chopra playing the boxing champ with a lot of zest and spirit. She looked like a fighter in the ring and outside it. But the roles she has on hand in the coming year don't seem to offer her the same vantage view as a woman on the top.


5. Deepika Padukone: Compared with 2013, 2014 was a disappointing year for the ethereal Deepika. Finding Fanny found her on a Goan trip that proved only her ability to master regional accents. Tamil in Chennai Express, Goan in Finding Fanny. Bajirao Mastani in 2015 should prove once and for all that she can look stunning while acting cool.