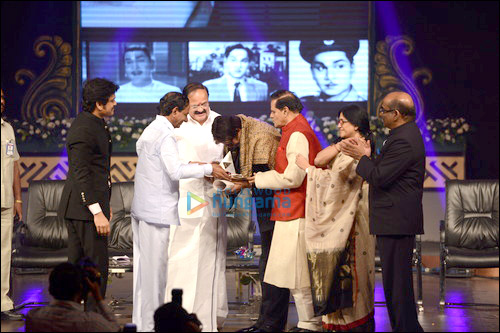 His immense contribution to Indian cinema has received recognition beyond boundaries of Bollywood. Amitabh Bachchan is a global figure and with fans all over the world, the megastar was presented with the Akkineni Nageshwara Rao (ANR) award at a lavish ceremony in Hyderabad on December 27.


Humbled by the honour, Amitabh Bachchan spoke about it on his Twitter handle, saying, "WDIDTDT : "What Did I Do To Deserve This !!" So humbled and grateful .. thank you Lord, thank you my makers, thank you well wishers." Adding further he wrote on his blog, "These moments are of immense importance to us as artists. They are a recognition of our contribution. But really ..? What contribution ... nothing, just nothing ..."

Along with other prominent personalities sharing the stage with Big B, there was Nagarjuna who was specially invited to present the honour which is named after his father to Amitabh Bachchan. Talking about the legend that Nagarjuna's father was, Amitabh Bachchan said, "Father and legend of Telugu cinema Shri Akkineni Nageshwar Rao ... a gentle human, filled with compassion ... but a talent that gave telugu cinema great respect and dignity .."


Amidst many responsibilities, Amitabh Bachchan is currently busy juggling between three films which is all set to release in 2015. Recently, we got a glimpse of his film with Farhan Akhtar and Aditi Rao Hydari titled Wazir, which is directed by Bejoy Nambiar. On the other hand, he is also wrapping up the Dhanush - Akshara Haasan starrer Shamitabh, directed by R. Balki. He is also shooting for the Shoojit Sircar directorial Piku where Deepika Padukone will play the role of his daughter and it also stars Irrfan Khan and Moushumi Chatterjee in prominent roles.