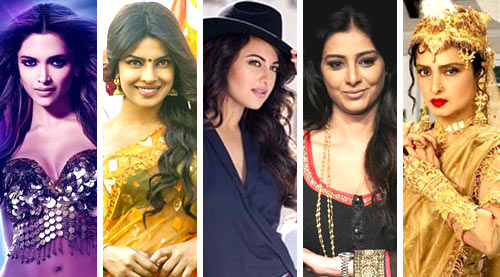 1. Deepika Padukone in Happy New Year: It's woefully wrong for a star-actress as powerfully popular as Deepika Padukone to give out the wrong signal to her fans especially at a time when women need to be empowered against patriarchal tyranny. Deepika played a thoroughly regressive woman taking insults galore from the man in her life just because he happens to be Shah Rukh Khan. She played Mohini a financially independent bar dancer who considers dancing in a bar to be an art form. Good for her! It shows she respects her space. But there is no dignity in her conduct towards the man Charlie she falls hopefully in love with. He shamelessly uses her to further his financial interests. And then bitches about her to his colleagues behind her back. Mohini (a distant cousin of Madhuri Dixit in Tezaab) overhears the terribly ungrateful and misogynistic things that Charlie says about her. But sigh! What to do? Mohini is a woman in love. Her theme song would be 'Main Charlie Main Charlie dekho pyar ki gali'. As long as she gets her man to smear that chutki bhar sindoor in her hair she is blessed. Shame, that a woman director could conceive a female protagonist so regressive.

2. Priyanka Chopra in Gunday: What was this spirited sassy sensuous woman of substance thinking when she decided to be sandwiched between two toy boys Ranveer Singh and Arjun Kapoor who were obviously more in love with each other than the leading lady? Come on, Priyanka. Heroines in our films stopped being a football in love triangles long ago. Even Vyjanthimala in Sangam had shown more spirit 45 years ago when Rajendra Kumar had 'advised' her to forget her love for him and settle down with Raj Kapoor.

3.Sonakshi Sinha in Action Jackson: What was Sonakshi thinking when she agreed to play this utterly stupid woman who believes-hold on to your seat belts-that seeing a particular part of Ajay Devgan's body-and we aren't talking about his eyes-brings her good luck. We don't know about her luck but Devgn was surely one lucky chap. Here was his heroine worshipping his procreational tool with religious zeal. Mera pati mera devta hai aur uska mojo mera super-devtahai....sentiment carried to the below-the-belt level.

4. Tabu in Jai Ho: While Tabu redeemed herself towards the end of the year with a gritty gutsy portrait of a woman with a mind of her own in Haidar, what on earth was she doing in this glorification trip for Salman Khan where every character had to praise the super-hero every 5 minutes? Tabu played Salman's sister. That was not such a bad thing, except for the fact that when goons attack her she threatens them with her Bhai-jaan's name instead of doing what any sensible girl would do in such a situation. Dial for help.

5. Rekha in Super Nani: Nope, there was nothing super about this Nani who was constantly taunted, abused, heckled and shouted down by her husband and children. Rekha's character took it all with a smile arguing that a Bharatiya Nari must always put family before self. We love Rekha. But we'd rather not see her at all than see her play such a doormat to a family of children so ungrateful they'd serve as a perfect endorsement for vasectomy.