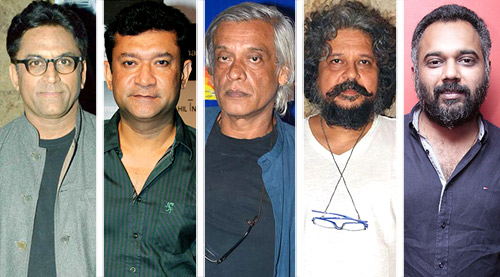 Ram Madhvani: "Bajirao Mastani...For the rasa and Indianness that Sanjay Leela Bhansali and his actors have captured. There is a feeling of viraha, longing, in this film that is uniquely Indian."

Raja Krishna Menon: "Notting Hill because it deals with the fantasy element in romance, Silver Lining Playbook because it shows romance to be all-encompassing, Vijay Anand's Guide because of the conflict between love and self-interest."

Rensil d'Silva: "Vikramaditya Motwane's Lootera. It transported me to a simpler world. It was based on my favourite short story The Last Leaf by O'Henry."

Neeraj Ghaywan: "Vijay Anand's Guide. It shows us that the highest form of love is that which liberates you beyond love."

Sahil Sangha: "Dilwale Dulhaniya Le Jayenge and Jab We Met. Both films gave us absolutely wonderful characters who shared a crackling chemistry and made the simplest moments magical to watch."

Amole Gupte: "Mehboob Khan's Anmol Ghadi. It takes us into a paradise of innocence."

Luv Ranjan: "Sidney Pollack's The Way We Were. It is unapologetic about why they come together, move away, again come back together. Deals with real relationship issues, Barbra Streisand and Robert Redford were perfect together."

Sanjay Gupta: "When A Man Loves A Woman. Because the woman is flawed in the way that men usually are, and the man struggles to hold on to her against all odds....Vijay Anand's Guide because it broke every stereotype of a love story in Hindi cinema."

Sabir Khan: "Richard Linklater's Before Sunrise. It's extremely relatable and intelligent. It's romantic and not cheesy."