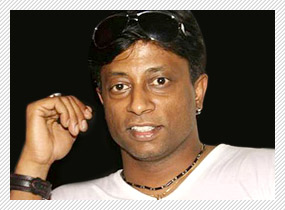 He made a humble beginning with films like Delhi Heights and Jugaad. However, this young man from Delhi has now made a big ticket entry with Zila Ghaziabad which boasts of ten times more budget when compared to his earlier efforts and has a cast that features names like Sanjay Dutt, Arshad Warsi and Vivek Oberoi. Though his journey during the film's making was a tedious process, he has eventually managed to pull it all together in a matter of two years and is now waiting for its release this weekend. Here is presenting Part I of the conversation with Anand Kumar.


Anand, you must be heaving a sigh of relief to see the film hit the screens, isn't it?
It's been a very long journey for sure. The movie is releasing two years after I signed it on 4th February, 2011. We started shooting only in June'11 though and from that moment on, it has been a roller coaster ride no less. See, these days it doesn't take too much to make a film but since Zila Ghaziabad is a multistarrer, we had to coordinate a lot on dates.


With all sorts of news floating around the film right through the making, how did you still keep your motivation at a high level?
Since we had already given so much to the film, there was no point pondering over things that were not in our favour. I don't come from any filmy background so for me to just come and make such an attempt is a very big deal. I was motivated just for looking at this film as a big offering. I knew that all this negativity would keep; after all I am not the son of someone big. People would tend to pull you down but you move on.


Did you also face issues due to ego clashes between actors?
While working on a film, everyone is possessive about the script and hence such little things keep cropping up. I was not looking at it so much though. At the end of the day, these actors didn't come to my house. I am not a big director after all. It was me who went to Arshad, Dutt saab, Vivek, Ravi Kishan, Paresh Rawal; these are big names and if they agreed to do the film due to the kind of script it has and the strength it carries, it was enough to keep me going.

Well, bringing Sanjay Dutt and Arshad Warsi opposite each other, after a very memorable Munnabhai series, has been a master stroke.

Yes, to have someone like Arshad play a villain in front of Dutt saab, and that too when he has played Circuit throughout his life and Dutt saab is carrying the weight of Kaancha Cheena, is indeed something. I and my writer Vinay Sharma knew from the very beginning that the character of Fauji in our film would have to be pitched as today's Gabbar Singh. We were excited that Arshad could be the chosen one for a negative role. In a way we are introducing him in a very different role which is that of a complete Gabbar of today. He is such a tremendous actor and has completely transformed himself. Dialoguebaazi between him and Dutt saab is going to be the highlight of the film.


Where does that leave pretty ladies like Minissha Lamba and Charmee Kaur in the film? How do they fit into this male dominated affair?
Charmee is Vivek's wife in the film and she has played her part very nicely. She is a good actress. In fact I had always seen Kangana in this role as it was tailor-made made for her. Due to North Indian setting and the lingo, she was just right. However she was so busy shooting during those days that her dates were not working out. In the end Sonu (Sood) recommended Charmee and we locked her for the part. She plays a pivotal role in the entire gang war and it is due to her that the entire mayhem begins. She has played this sweet and simple girl really well. So much so that you end up remembering Juhi Chawla from Qayamat Se Qayamat Tak days; you would fall in love with her. As for Minissha, she has a small role in the film as Arshad's love interest.


Meanwhile you also have item numbers by Geeta Basra and Shreya Saran. Guess that should bring on the glam quotient.
Geeta is looking terrific in 'Baap Ka Maal'; she has danced really well. It is a very special song in the film and what you have seen on TV so far is just a glimpse. On the big screen there is a lot more of the song that you would see. As for Shreya, she is 'Chamiya No. 1' in the film. She is going to make people dance in the aisles. Also, let me mention Divya Dutta as well who is playing Arshad's sister in the film. She is the surprise package here and has done some good action too!

(To be continued in Part 2)