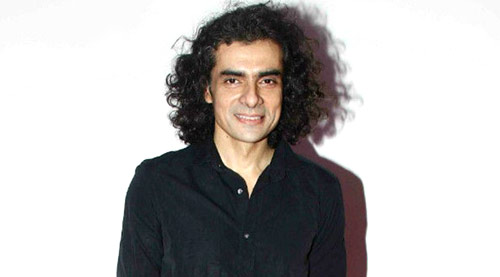 A combination of critical acclaim and commercial success - Now this could well be at the top of a wish list for any director. Ever since Jab

We Met, Imtiaz Ali is seeing it all. Love Aaj Kal, Rockstar and Highway later, he is now gearing up for his most ambitious film till date,

Tamasha. Reuniting with his producer Sajid Nadiadwala and composer A.R. Rahman after Highway, while roping in Ranbir Kapoor (Rockstar) and

Deepika Padukone (Love Aaj Kal) again, he couldn't have asked for more when it comes to putting together a dream team.

With just a couple of weeks remaining for the film's release, the director opens up on Tamasha. The obvious question for him is - Was it a given that after

Rockstar and Love Aaj Kal, he would be roping in Ranbir and Deepika together for Tamasha?

"Absolutely. I had thought that I would offer my actor only something that he or she hasn't done before, especially when that person is a friend. That's one thing

that I am very sure of. So yes, getting Ranbir and Deepika together is an important thing. Both of them suited the role and were very excited for the parts that I

had to offer to them," says Imtiaz.

Of course, he was aware of the fact that the personal equation of Ranbir and Deepika would be much in news.

"I know that there is a lot of talk going around about their personal relationship. That is separate though from what I want to say through my film," Imtiaz says,

"For me, it is a bonus to get them together as they are two very good actors. When that happens, they can improve each other. It becomes a case of 2+2 = 5."

Meanwhile as a filmmaker, he has attempted varied love stories right from the days of Socha Na Tha and Jab We Met, while narrating them differently in

each of his attempts. In fact his last film Highway, which was again with Sajid Nadiadwala, was a unique love story between Alia Bhatt and Randeep Hooda.

So what is it that is waiting to be explored in Tamasha, which is a much bigger commercial outing for him and his producer?

"In case of Tamasha it is about a guy who meets the girl where she tells him that 'you are someone else but are pretending to be this other guy. There is

someone else inside you'. How the whole shell breaks for him is what takes their story forward," says Imtiaz, "In the film, Deepika is the muse for Ranbir, the

artist. She is the woman standing behind him to make him successful. She is an inspiration for him to be himself. When someone really loves you then she will get you

to listen to your heart. It is such kind of relationship that Ranbir and Deepika share in the film where she acts as his inspiration."

Now that promises to be magic on screen.