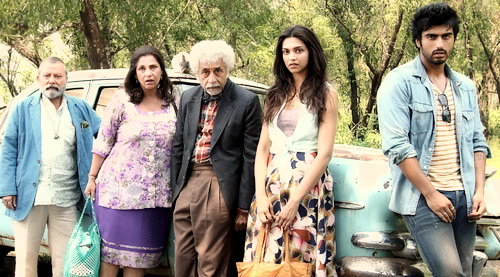 The title Finding Fanny could not have been more accurate: Fanny was finally found in the film's story, the

producer (Dinesh Vijan and his partners, Fox Star) found a safe profit, and the cinema buff and media found a refreshing movie that

was endearing as well as entertaining!

The strangest part here was the fact that Finding Fanny, despite being a niche product (with its main version in English!) did almost fifty

percent more business than a big-budget, well-marketed, mainstream (so theoretically more appealing) Hindi co-release. And that film had a

mass-friendly subject with appealing music and was also a pioneering movie in technological terms!

As against all these mass-friendly factors, Finding Fanny had essentially just one Hindi promo song (composed by Sachin-Jigar for the

end-credits), an English song (composed by a Frenchman) that was also unconventional, and random music tracks, one of which was in Punjabi for

a film set in Goa!

Therefore, Finding Fanny laid no claim to conventional audience gratification in its storyline, script and ethos. And its main protagonist was

Yes, superstar Deepika Padukone, the Numero Uno actress of today, was in the romantic lead, and a Gunday-2 States-fresh Arjun Kapoor

was cast with her. But they were both part of an ensemble cast - the story was driven by veteran Naseeruddin Shah, with Dimple Kapadia and

Pankaj Kapur as the other key players. Yes, we had another 'today' man, Ranveer Singh, but in only a teeny-weeny cameo.

For its new and untapped genre (which is always more important in economics than the cast and budget!), the film took off to a flying Rs. 19.9

crore weekend, raking in a cool Rs. 28 crore-plus in its first week in India alone! Despite trade cynicism, it also passed the 'Monday test'

(collections beyond the opening weekend when most films collapse), amassing a neat Rs. 2.5 crores.

This indicated a strong word-of-mouth, for critic reviews (though favorable in this case) barely influence viewers. What then brought in the

audience even on Day One, before the positive word-of-mouth spread?

mere projects. I am thrilled that we made this film now when audiences are more receptive, for this film has not only no commercial angle but

also no past reference point, just like Go Goa Gone. I think that it is the way we structured the film that worked. The 13 to 21 age group has

loved it in particular."

Though the film has not

been made for the numbers, the return-of-investment (ROI) has been fantastic, both for Vijan and Fox Star, his partners. The film has cost Rs. 12

crore, inclusive of cost of production, prints and advertising, and recovery was reportedly done by the end of the first week.

Says Vijan. "In 2004, I co-produced another English film, Being Cyrus, which also got similar appreciation and made money. Those were

different times and the mathematics was simpler, but what I have realized is that films made with purity of heart are always rewarded."

The gratifying part is that the film has also worked big-time overseas and collected Rs.1.77 crores on opening day from places like North America,

United Kingdom, Australia and New Zealand. Remarks Vijan, "We now want to release it in non-traditional Hindi film markets like Korea and Japan

within the next 18 months."

An even more pleasing, though non-commercial, aspect is that the film industry has widely appreciated the film. "The compliments have come

heartening support. And Saif Ali Khan's quote on your website Bollywoodhungama.com is special."

Deepika Padukone, of course, is the Numero Uno actress of our times, and this is her third film for Vijan. It was actually his Cocktail that set

her off on an upward zoom that has never stopped, and we prefer to think that she too had a major role in this path-breaking performance at the

box-office. As the shrewd selector of scripts has always emphasized, "When Dinesh and (director) Homi Adajania narrated the idea on the sets of

Cocktail, I knew that I just had to do it!"

Singh's cameo was more to oblige his current flame and Goliyon Ki Rasleela - Ram Leela co-star rather than for the movie's needs. After all,

no English film made in India before this has turned in this sort of business. And stalwarts like Dimple Kapadia, Naseeruddin Shah

and Pankaj Kapur were sidelined in the marketing and interviews for the media.

Denying this calmly, Vijan feels that stars do make an off-beat film more palatable, but cannot make it successful on their own. "The audience can

smell a good movie. I also do not agree that we stressed on my young stars in the promotions. Right from the first look to the music launch, our

marketing was as pure and honest as the film! We always stressed that it was an ensemble cast film. You can see that even in both the songs we

Accepted, but Vijan must accept too that by the time his film was ready, Deepika had grown bigger than ever and that two of Arjun Kapoor films

had clocked over Rs. 170 crores in India alone. And stars do have a magnetic allure, even though it was essentially director and co-writer Homi

Adajania who was the principal creative whizkid.

Like Homi's Being Cyrus and Cocktail, Finding Fanny too was created with sincerity and passion but it is the star presence, we feel,

that has ensured its path-breaking run at the box office.