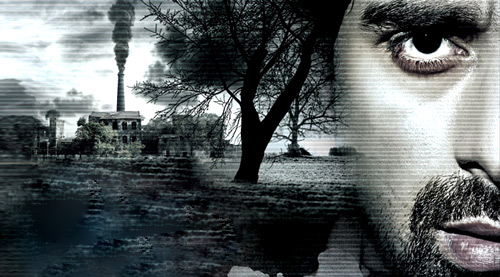 After last week's tasteless daawat, here is film that does the horror genre proud. It's original and hey, in spite of being a horror film there is not even one creaky door in the length and breadth of the film. Can you beat that!


Yes, portions of the film are clumsy and embarrassing, specially the way the youngsters at the prologue are shown to talk. Why must all 19-year olds talk with 'dudes' and 'bros' thrown in like noodles in a chicken dish?


Fortunately 3 A.M. doesn't rely on too many external props to wean us in its favour. It stays true to the horror genre without buckling under the pressure of perpetuating terror. The frights flow naturally and for audiences who like to SOL (scream out loud, silly) there are quite a few moments for that sense of desperate urgency that separates Manoj Night Shaymalan's Sixth Sense from his subsequent duds.


I was specially fascinated by one sequence in the beginning where Rannvijay, playing a television software maker with a yen for offbeat content (the kind of guy who would direct 3 A.M.), wakes up in the middle of the night to see his girlfriend (Anindita Nayar) sobbing next to him. A few minutes later he gets a call saying she's dead.


Scary? Yes, quite a bit. In 3 A.M. director Vishal Mahadkar keeps the goings-on largely edgy and creepy, though the one-setting milieu does get tedious at times there is always something happening on screen to keep us from falling out.


The film creates an aura of foreboding without resorting to the cliches of the horror genre. The plot about a chap's bereavement and his ferocious encounter with the after-life is mainly restricted to a run-down (read: haunted) mill .That's where the narratives lives and breathes to its last. The camera circles the desolation eerily. Trouble starts when the director conspires to take the plot out of its naturally chilling habitat.


There is a specially intrusive Goan episode pumped into plot at a time when the ghouls get going in a big way.


The problem with the horror genre in Hindi is that it doesn't know where to get off. This one doesn't overstay its welcome. The twist in the tale where Rannvijay turns out to be what he doesn't want us to know, is not novel. The treatment to a large extent is the camera movements (Vijay Misra) in the fright-inducing scenes are fluid but controlled. Raju Singh's background score is tempered by a sense of self-directed surprise, as though the music was as taken by surprise by the goings-on as the audience is expected to be.


The special effects are toned-down and done effectively. Most of the time 3 A.M. cruises along exploring the bond between this life and the afterlife without getting tangled in spiritual polemics. Miraculously this horror film avoids the excesses of the genre. It's done in tempered-down tones and the storytelling tapers down to a well thought-out finale.


Rannvijay, let me add, is a better actor than many of the corporate-backed paper heroes who sell biryani in movies with a bewildering lack of sincere gusto. This guy sells spook with conviction. Rannvijay expresses the helplessness of bereavement like a man who has seen mortality from close quarters.


I have to mention a shot where actor Salil Acharya, now royally possessed runs across the frame on all fours like a wild boar. The body language , in the wake of what happened in the Delhi zoo this week is terrifying .


3 A.M. is a sharp slick scare-fest. It delivers the fear quotient without resorting to cheap gimmicks or excessive gore. This pyara para-normal experience may take you by surprise during a week when Hollywood unleashes a big-budget fear fest like Deliver Us From Evil.


Evil has many forms.3 AM is pleased to explore and not excessively concerned with foot-falls as long as the foot that falls sends a shiver down the audiences' spine.