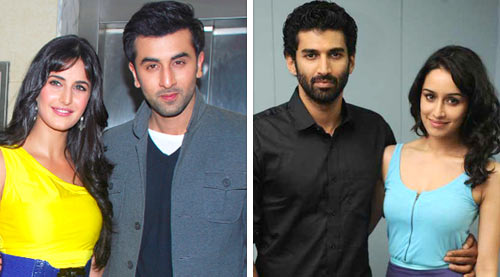 Virat Kohli thinks it's 'common sense' that he and Anushka Sharma are a couple as they are seen together constantly.


Tell that to Nagesh Kukunoor and his faithful companion and associate Elahi Hiptoola who have been seen together for the last two decades and are yet to confess to a relationship.


A list of the couples who are on the verge of coming clean:


1. Ranbir Kapoor-Katrina Kaif: As soon as he pops the question and asks Katrina to marry him, this couple will go official. The plan, say close friends, is for the entire family, new wife included, to love together at the family bungalow which is being renovated. But with a privacy clause for Ranbir-Katrina. Wait for an announcement early next year.


2. Aditya Roy Kapur-Shraddha Kapoor: They've been in a state of denial for a year now. That will change soon, we hear. Apparently, the phantom-couple will soon be hinting at their togetherness to the world at large. Since we hear it's Shraddha who is loath to confess she will be the one belling the cat.


3. Sushant Singh-Ankita Lokhande: Open about their live-in relationship coy about their marriage plans, this handsome couple is expected to make their togetherness official early in 2015.


4. Uday Chopra-Nargis Fakhri: The off-and-on couple seem to have resolved their cultural differences. Uday's mom Mrs Pam Chopra has apparently made peace with the possibility of a semi-firangi bahu. Which is more than can be said about Mrs Neetu Kapoor.


The couples that are definitely not coming out in the open in 2015: