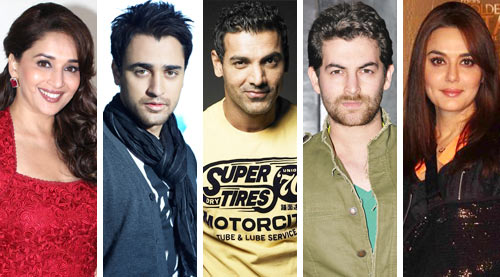 Kahan gaye wow log? They were the toast of tinsel town. Then suddenly out of favour during 2014. A list of the fallen stars in 2014

1. Madhuri Dixit: Her comeback got the kind of biblical build-up that most actresses dream of. Icon, Legend, Diva...Deva Re Deva! Within the industry they deified her. But the two comeback releases Dedh Ishqiya and Gulab Gang both released in January 2014 left the audience underwhelmed. At the end of the year we saw no queues to sign Mrs. Nene.

2. Imran Khan: Paternity leave for a year? Even working mothers get tired of changing nappies for so long. But Imran Khan, it seems, is fully into the papa's mindset. His last release Gori Tere Pyar Mein cast him as South Indian. Giggle giggle. Now we know why Imran's career has nosedived.

3. John Abraham: Where was John in 2014? Last seen in Shoojit Sircar's gripping Madras Cafe in 2013 there was no John Abraham release in 2014. His marriage to Priya Runchal did create some interest. But the two are yet to be seen together after the marriage. Coy hai kya?

4. Neil Nitin Mukesh: Completely wiped off the movie map .Wrong selection of films... The last being Shortcut Romeo which proved to a foolhardy shortcut. No releases in 2014.

5. Preity Zinta: So talented so pretty so full of the zest for life...Preity's IPL stint completely took the focus away from her film career. She was only seen in a cameo in Happy Ending in 2014. The less said about it the better.