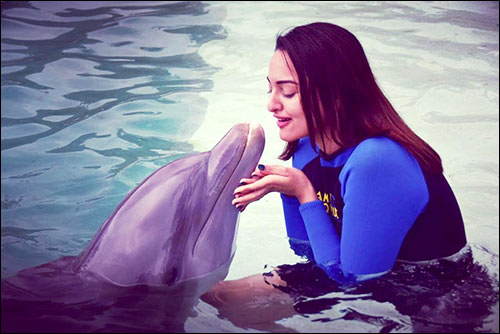 Sonakshi Sinha, who was last seen in the 2015 release Tevar has been busy shooting for her next venturesAkira and Force 2. Well the actress who is in Miami having a gala time recently decided on visiting an aquarium in Miami.

Interestingly, while there Sonakshi decided to enter the water and spend some time whispering to a dolphin. Posting an image of the same on her Instagram profile Sonakshi added, "Just having a very mushy conversation with my new friend Ripley at the #miamiseaquarium! #somiami #lovefl #dolphinlove #mermaid".