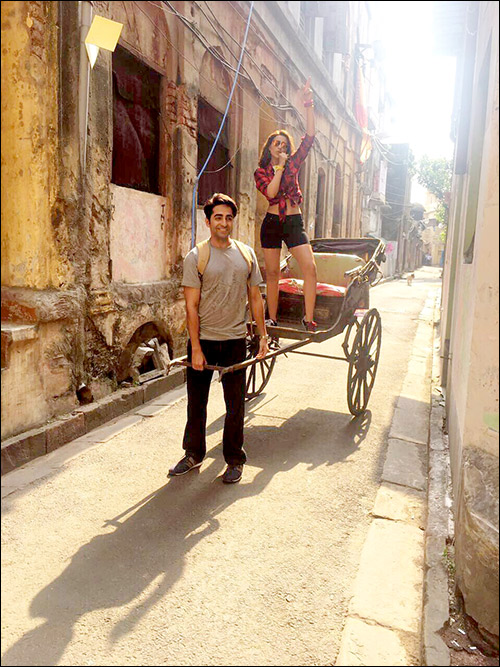 Earlier we had reported that Parineeti Chopra and Ayushmann Khuranna had been roped in for the Yash Raj Film Meri Pyaari Bindu. Later we revealed both Parineeti and Ayushmann's look and character in the film. Well, the duo who have commenced work on the film are in the city of joy Kolkata shooting.

While Parineeti can't stop raving about the ongoing shoot of the film in Kolkata we came across this image of the duo shooting on the streets. The image that was posted by the makers on the film's official twitter handle came with the simple post saying, "Bindu & Abhimanyu are ready to spread some love in the city of joy Kolkata! #MeriPyaariBindu". By the looks of it, it seems like Ayushmann is posing as a rickshaw puller while Parineeti is her usual quirky self-striking a pose that also depicts her character of an aspiring singer performing at a concert.

As for the film Meri Pyaari Bindu that is produced by Yash Raj Films and Maneesh Sharma is being directed by Akshay Roy. The film is slated to hit screens later this year.

Shah Rukh Khan looks stunning as he sports a…