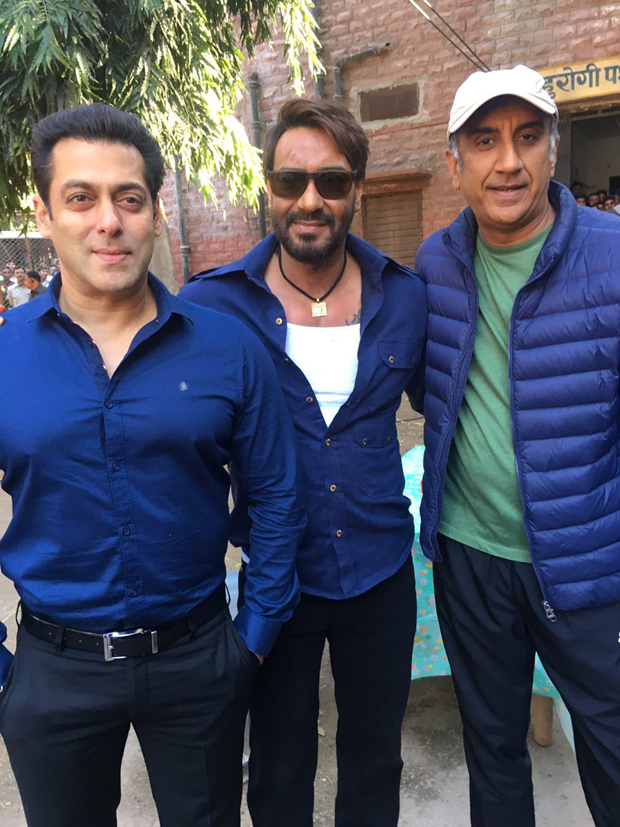 Amidst several fueled up controversies, one was the alleged fallout between Ajay Devgn and Salman Khan recently due to their upcoming projects. However, denying the buzz the latter dropped in on the sets of Ajay’s film Baadshaho.

Readers may be aware that speculations of a rift between the two cropped up after Karan Johar announced a project where he will be collaborating for the first time with Salman Khan as producers for a film starring Akshay Kumar. Apparently, there were rumours that the films to be produced by Salman Khan and yet another one to be produced by Ajay Devgn were on the same subject of Battle of Sargarhi.

However rubbishing these were the two actors who seemed to have bonded on the sets of Baadshaho. The director of the film Milan Luthri took to social media to tweet this picture with the two superstars in the same frame with a caption saying, “Both the sultans on the sets of #BAADSHAHO @BeingSalmanKhan @ajaydevgn.”

The film to be produced by Ajay Devgn was Sons of Sardaar: Battle of Saragarhi which was supposed to celebrate the spirit of Sardars and their valor in the 1897 battle. Interestingly the prequel, Son of Sardaar had Salman Khan in a special appearance in the song ‘Po Po’.

On the other hand, we wonder if Salman Khan has a special appearance in the Milan Luthria-Ajay Devgn film Baadshaho. The film in question also stars Emraan Hashmi, Ileana D’Cruz, Vidyut Jammwal, Esha Gupta among others and it is slated to release on September 1.