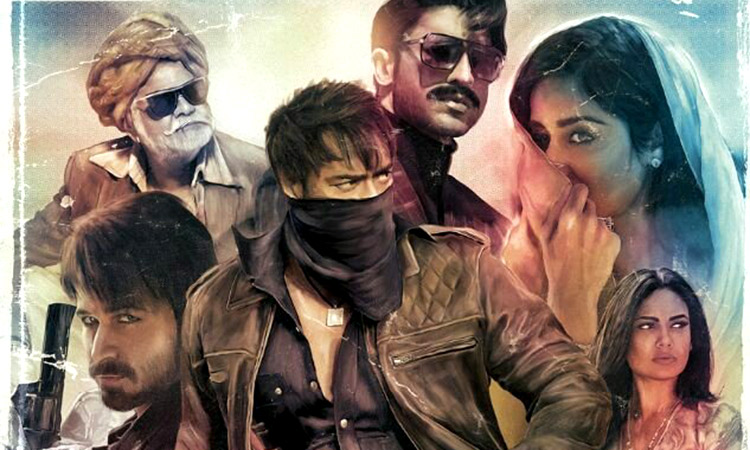 Usually, catastrophes and tragic incidents give rise to loads of films, be it World Wars, 1992 Mumbai riots, 2002 Gujarat riots, East & West Germany feud, 9/11 etc. But surprisingly, very few films have dealt with the Emergency, considered as a dark period in post-Independence era. Before INDU SARKAR that released in July this year, the last film that touched upon this era released twelve years ago - HAZAARON KHWAISHEIN AISI. BAADSHAHO isn’t a political film but does throw light on the horrors of that era. But more or less, the film is an action adventure with inspiration from real-life stories. So does it turn out to be an exhilarating saga or turns out to be terrible like the Emergency, lets analyse.

BAADSHAHO is the story of a group of thugs trying to loot a truck full of treasure. The year is 1975. Emergency has been declared and the government targets the royal families of Rajasthan, alleging that they have not declared their wealth after the privy purses were abolished in 1971. Gitanjali (Ileana D'Cruz), a royal princess, is arrested. Her palace gets looted and all the treasures are seized by the government to be taken away to Delhi. Gitanjali wants to stop this legalized plunder of her wealth and she asks her lover Bhawani Singh (Ajay Devgn) for help. Bhawani recruits a team of badasses just like himself – the flirtatious Daliya (Emraan Hashmi), the alcoholic but flawless locksmith Guruji (Sanjay Mishra) and the sexy loyalist of Gitanjali Sanjana (Esha Gupta). The mission is to stop and loot the truck carrying Gitanjali’s treasures under the orders of Major Seher Singh (Vidyut Jammwal). They have 96 hours and the distance is 600 kms of open desert. How the badasses manage to succeed in their mission forms the rest of the story.

BAADSHAHO begins on a great note. The opening party sequence might not seem that significant but its relevance is revealed in the later portion of the film. Hence, one shouldn’t miss the opening at any cost. The badasses are introduced in style soon after the plot is established. The heist takes place only minutes before the intermission. But till then, the film manages to engage with its dialogues, drama and direction. Two scenes really stand out at this point – the chase sequence between Dalia and Seher and how the badasses plan to steal gold from the truck. The latter sequence is something to watch out for and its unique execution will surely surprise you. The intermission point is a blast and the twist in the tale unveiled at this point takes the film to another level. Post-interval too the madness continues. Dalia barging into the police station with the armoured truck is bound to be loved. However, the film ends on a confusing and an abrupt note. The finale fight goes for a toss – there’s too much of smoke in the visuals and it becomes difficult to comprehend what’s happening exactly.

Rajat Aroraa's story is interesting. Rajat Aroraa's screenplay is effective in the first half but stumbles heavily in the second half. Rajat Aroraa's dialogues however are top-class and maintain the entertainment quotient in the film. ONCE UPON A TIME IN MUMBAAI, THE DIRTY PICTURE, KICK, GABBAR IS BACK and now BAADSHAHO, Rajat truly takes films on a high with his one-liners! Milan Luthria's direction is simple and he manages to keep the proceedings free of complications. He understands that this is a massy flick and should have a pan-India appeal. In that regard, he scores. But just like the script, the direction too falters towards the end

Ajay Devgn delivers a first-rate performance. His character doesn’t fear death and is ready to take up any challenge. Ajay plays the part very well and looks totally convincing. Emraan Hashmi is quite cool and it’s a pleasure to see him playing such a massy, ‘chichora’ role that got him recognition in Bollywood in the first place. But one wished his funny side was exhibited more in the second half. Ileana D’Cruz looks every inch a Queen in distress. She carries herself very well and dominates a chunk of the first half with ease. Esha Gupta is confident but sadly, doesn’t have much to do. Her character in fact isn’t well established – who is she and where has she come from? Maybe, if her character was sexier or more glamorous, it would have been better. Vidyut Jammwal gives his best shot but gets overshadowed in the presence of so many performers. Sanjay Mishra arguably gives the best performance out of all actors. The actor plays his part and mouths dialogues with style and panache. Sunny Leone is as usual smoking hot. Priyanshu Chatterjee (Sanjeev) plays yet another version of Sanjay Gandhi after Neil Nitin Mukesh in INDU SARKAR and just like the latter, he is wasted as well. Denzil Smith (Rudra Pratap Singh) and Sharad Kelkar (Durjan Singh) are decent.

Songs don’t have a role to play in the film. Two songs out of three are relegated to background – ‘Mere Rashke Qamar’ and ‘Hoshiyar Rehna’ – and both are foot-tapping. ‘Piya More’ is quite exciting and well shot. John Stewart Eduri’s background score is a big highlight of the film. It adds to the excitement.

On the whole, BAADSHAHO is a nice package of great dialogues, amazing visuals, efficient direction, superlative performances, exciting action and tension-filled drama. At the box office, the film is bound to grow over the weekend and it will also benefit on weekdays due to post-Eid celebrations. If you are a fan of thriller, action and masala movies, you shouldn’t miss this one.

A pout here, a tongue flick there and oodles of OOMPH – Esha Gupta went all flirty for the camera and how!

Summer Sorbet, anyone? Esha Gupta and her dramatic gown will make you lust for one in this sweltering heat!

Allow Esha Gupta to show you the sultry way to wear denim on denim!

Simran collects 3.85 cr. in its opening weekend in overseas

A very average movie that belongs to the 90's. BH - What do you look for in a movie while reviewing…

Badshaho turns out the be the best film I watched so far in 2017. The power-packed action,…