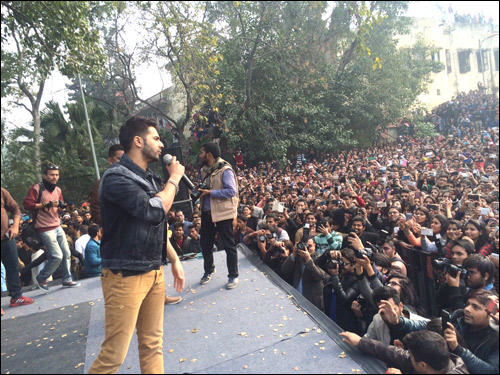 Right after his debut (Student Of The Year), Varun Dhawan not only gained popularity among female fans but his quintessential hero avatar and romantic image on screen managed to make him the perfect chocolate boy on screen. But that did not stop the actor from deviating from his usual self and he decided to experiment with a grey role in the upcoming film Badlapur.


Of late, the actor has been promoting the same along with co-star Yaami Gautam and producer Dinesh Vijan in various cities across India. Recently, Varun Dhawan visited Ramjas College in Delhi in order to promote his film and it surely was one of his most memorable promotions till date considering that his visit had created a mass frenzy. Apparently, the college venue had extensive gathering beyond its capacity. Despite that, Varun remained calm and went on the stage to perform.

The actor was quite rattled when hundreds of fans rushed towards the stage while he was performing. In the middle of his performance some fans started shoving each other to get a closer glimpse of the actor because of which two girls fell and hurt themselves. Though he was still on stage, Varun saw the incident and immediately rushed to help the girls and gave them water.


Varun Dhawan has always been known for his kind nature. Previously during the promotions of Humpty Sharma Ki Dulhania, Varun and Alia had helped an ailing man after a road accident and had admitted him to the hospital.