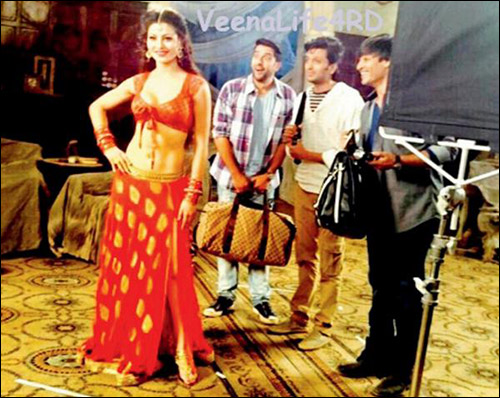 The Masti boys are back and according to the makers, the third installment of this sex comedy franchise has a lot to look forward too. While Grand Masti created waves with its raunchy performances, we hear that the third film in the series, Great Grand Masti, will resemble the first installment. The actors of the film have often taken to social media sites to update their fans on the progress of the film and now, a picture from the sets of the film has been doing the rounds on the web.


The image in question has Urvashi Rautela sporting an orange lehenga and a matching blouse, as the boys, namely, Aftab Shivdasani, Riteish Deshmukh and Vivek Oberoi are spotted ogling at her. It is being said that Urvashi plays the role of the boys' girlfriend as the three are trying to find some 'masti' in their boring life.

Aftab Shivdasani reunites with his family in…