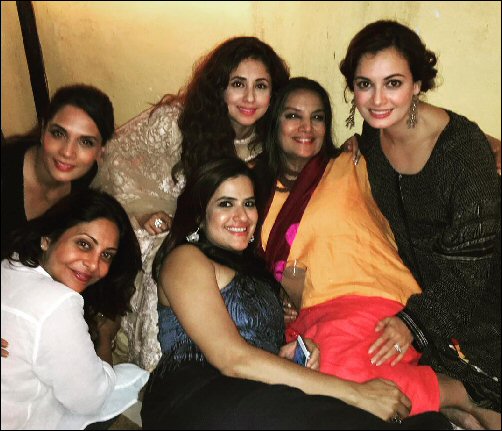 Just a week ago, we reported that Urmila Matondkar tied the knot with Mohsin Akhtar Mir in a hush-hush ceremony in Mumbai and later, released a press statement along with a wedding picture. And now we got a glimpse of the new bride hanging around with a bunch of her friends from the industry and also her well-wisher Shabana Azmi whilst celebrating the occasion of Women's Day.


For the uninitiated, Shabana Azmi and Urmila Matondar share a special bond ever since the latter was a child actor. From Masoom to Tehzeeb, Urmila has also played the role of Shabana's daughter more than once. And now rejoicing the moment of her wedding was her on screen mother along with friends from the industry which included Dia Mirza, Richa Chadda, Shefali Shah among others. Richa who posted the image on her Instagram page, also added a caption full of hashtags saying, "#sheroesall #WomensDay #wisdom #inspiration #whoruntheworld #loveyourself"