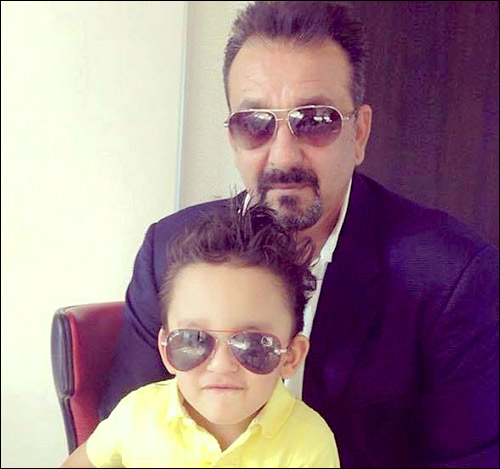 It has been more than a week since Bollywood actor Sanjay Dutt walked out as a free man and now he is all set to roll. But before he gets into the rut, we hear that the actor has been squeezing out as much time as possible to spend it with his family, especially with his five year old kids, Iqra and Shahraan.


A picture of the actor and his son has gone viral on social media and we got a glimpse of Sanjay Dutt's avatar as a doting father. Posing with sunglasses, the father-son duo is all smiles for the lenses. Though Sanjay Dutt is yet to resume work, we hear that the actor has several films already lined up and will be first committing to the ones he signed or are half way through due to his untimely imprisonment sentence.


Rajkumar Hirani, a close friend of Dutt, has also announced a biopic on the actor starring Ranbir Kapoor and will be meeting up with Sanjay frequently to discuss on the same.