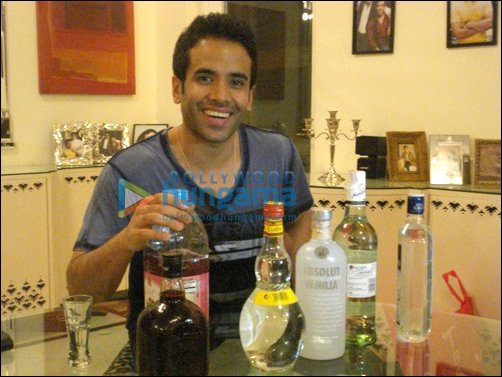 Tusshar Kapoor held a special Singles bash on Valentines Day (Feb 14) for all his single friends and cast and crew of his forthcoming release Shor In The City. The highlight of this bash was a special drink called the 'Shor Shot' prepared by Tusshar himself.

Bollywood Hungama spoke to Tusshar to find out what went behind the making of this special drink. "Well the idea was to have fun in a different way and hence we had this bash celebrating Being Single on Valentines Day. The 'Shor Shot' is a fun, trippy drink just like our film Shor In the City."

On being asked to reveal the concoction of the 'Shor Shot', Tusshar said, "The 'Shor Shot' is a concoction of Tequila, Gin, Vodka, White Rum (Bacardi) and Cranberry. All of us including Sophie, Lovely Singh, some of my office staff and my single friends from the media had a blast."

Now that the partying is over and done with, Tusshar is gearing up for the promotional activities for his next release Shor In The City which releases on April 28. Besides Tusshar, the film features Nikhil Dwivedi, Preeti Desai, Radhika Apte and internationally renowned actor Sendhil Ramamurthy.