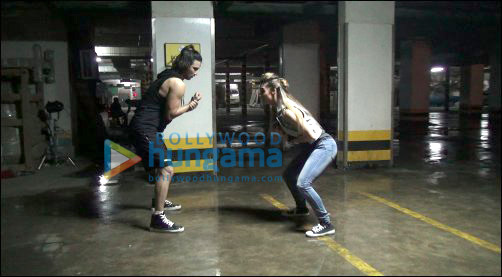 The makers of Detective Byomkesh Bakshy! recently shot a special music video for the film which will be launched on Monday. The song is choreographed by Lauren Gottlieb and was shot in one night after a long rehearsal of 50 hours. She read the script in depth and came up with the dance steps so as to keep it in sync with the theme of the film. The song has a very complex choreography and this is one of Sushant's toughest dance numbers.

Sushant Singh Rajput went all out to prepare for this song. He wanted it to be perfect and ensured he gave his best for it. He trained rigorously and practiced for 50 hours to get the moves for the song right. Despite its complexity, Sushant completed shooting for the music video in one night, and this was because he put in 50 hours of practice into it.

So while the music video was originally scheduled for a two night shoot, Sushant finished shooting for it in one night due to his dedication and hard work. Director Dibakar Banerjee was mighty impressed with him for pulling off this feat.


The song is a rap number titled 'Bach Ke Bakshy' which will have Sushant in two different avatars in it.