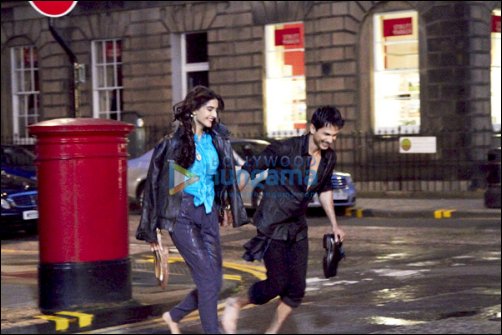 The one good thing that happened because of Sonam's defiant rain-drenched shooting earlier this week for Mausam at the ND Studios in Karjat (outside Mumbai) was that Shahid Kapoor proved himself one of the most thoughtful co-stars she has ever worked with. So concerned was he about her health after her recent bout of illness that Shahid was seen repeatedly asking if she was okay, and making sure that she was amply buffered with warm clothes and steaming beverages between shots. Sonam was touched.

What's that they say about the rains being the most romantic device for bringing two people together? Post their splashy shindigs on Tuesday and Wednesday, Shahid and Sonam are now the best of friends and Pankaj Kapoor is very happy. The chemistry between the pair in Mausam has just improved.

Bhai, Mausam ka takaaza hai! And so what if Sonam was forbidden by doctors from getting soaked in the rain?

She's barely recovered from her 15-day forced-holiday after being hospitalized for nervous exhaustion. And Sonam Kapoor was back to the grind this week, doing exactly what the doctors had warned her against. Getting drenched in the studio rain. And her father Anil Kapoor is not too pleased about it. The most lethal way to develop an infection after recovery from a bout of exhaustion and fever is the dirty studio rain. The concerned father had apparently requested the producers of Mausam to postpone the rain sequence for later when Sonam's immunity system would be strengthened.

Says a source, "But the sequence in the rain had been postponed for a month now. Sonam didn't want to be held responsible for any further delay. She insisted on getting under the studio rain for the scene and staying there for two days. She gave her shots without a care about her health."

Says the hugely-impressed producer Sheetal Talwar, "Sonam's dedication had all of us staring in jaw-dropping amazement. We were willing to push the rain sequence a bit more ahead for her health's sake. But Sonam insisted on doing the entire thing in the studio rain which is not very healthy. Shahid and Pankaji really looked after her."

When asked if Sonam's father Anil was unhappy about the daughter taking liberties with her health, Talwar retorts, "Anil has spent his entire career taking risks. It's in Sonam's genes to push herself beyond endurance."