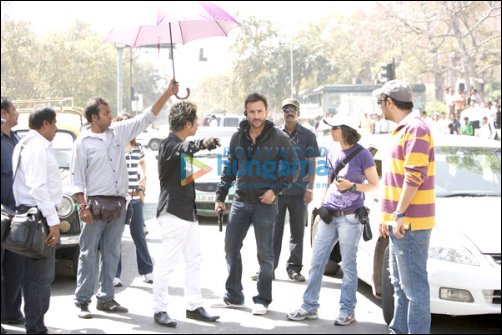 Saif Ali Khan is going all out to get into character for his role in his home production Agent Vinod. Since the film involves some heavy duty action sequences, Saif has been training hard with noted action director Peter Heinz.

These pics were taken during the recent shooting stint in Delhi during which Saif filmed some kickass action scenes under the guidance of Peter Heinz.

In fact to master a certain form of martial arts technique and to add further authenticity to the action scenes, Saif has now even taken off to Ho Chi Minh City, Vietnam along with Peter Heinz. Since the place specialises in martial arts form such as 'viet vo thut' and 'vovinam', Heinz felt its best that Saif undergoes actual training in Vietnam before shooting the remaining stunt sequences.


Agent Vinod has Saif paired along side lady-love Kareena Kapoor. The film is directed by Sriram Raghavan and is expected to release later this year.