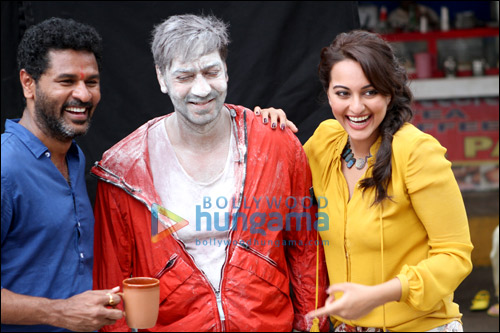 While we are well aware that Prabhu Dheva's directorial Action Jackson will have enough of humour elements to add to the entertainment quotient, the cast on the sets of the film too seem to be in an equally jovial mood. Prior to this, we have heard about many actors playing pranks on the sets but this time around, all the hoopla was for a scene in the film.

Apparently, the leading lady Sonakshi Sinha had to throw 'atta' (flour) on Ajay Devgn as a part of a sequence in the film but it seems that it went a little amiss and Ajay ended up hurting his eyes in the process. Though it gave a burning sensation in his eyes, Ajay continued with the shoot. However, post the pack up, the actor had to take a two day break to recover and later, when he resumed he had to start over with the same shot. Hence, Ajay once again managed to paint his face and body white with the 'atta'. Impressed with this, Prabhu Dheva and Sonakshi Sinha too decided to get clicked with Ajay Devgn to capture the moment.

Produced by Gordhan Tanwani and Eros International, Action Jackson has Ajay Devgn playing triple roles. Along with Sonakshi, Yaami Gautam and debutant Manasvi Mamgai will also be seen in strong roles. The film is slated to release on December 5.