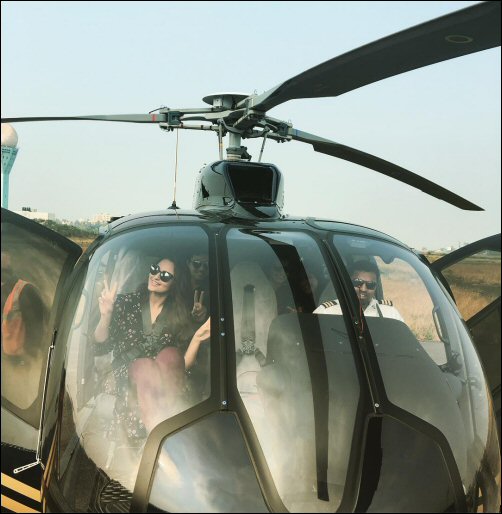 Sonakshi Sinha seems to have found yet another way of adventure even amidst her work schedules. The actress who has been travelling around the world owing to her film Force

2, recently decided to use a chopper to a nearby location from Mumbai.

The actress travelled from her hometown to Kolhapur to attend an event and decided to use a helicopter in order to save time. Giving us glimpse of the moment, the actress posed whilst she remained

seated inside the chopper and shared it on Instagram saying, "My ride for the day! #chopperride #worklife". The actress wanted to save the 7 to 8 hour ride for the event in order to make it on

time. Reminiscing about her previous experience on the chopper, Sona also revealed that she has been frequent chopper traveller during her Dabangg and Tevar days.

Besides her, there are several other celebrities like Amitabh Bachchan, Aditi Rao Hydari, Shraddha Kapoor and Aamir Khan have gone to extensive lengths to reach on time with some of them even

travelling in general and public transport.