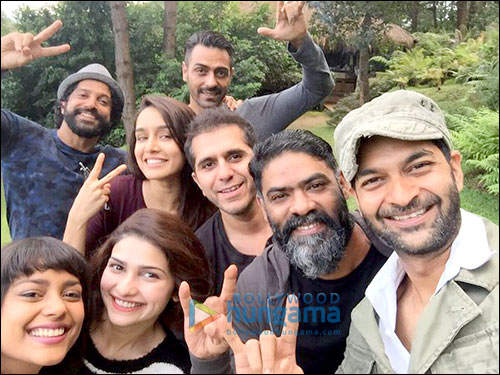 Shraddha Kapoor recently had to take a break from the Shillong schedule of Rock On 2 due to an eye injury. However, the actress is now fit and fine and has even returned to shoot the film.


In fact, Shraddha Kapoor posted a picture with all of them, that is, Farhan Akhtar, Arjun Rampal, Prachi Desai, Shahana Goswami, Purab Kohli, co-founder of Excel Entertainment and producer Ritesh Sidhwani and the film's director Shujaat Saudagar. The entire team was obviously thrilled to see Shraddha recouping from her injury and from what we hear, the doctors from Mumbai have prescribed a few drops as medication. However, it is being said that her injury did not delay the shoot schedule fortunately and Shraddha will start shooting for the film now.


Rock On 2 has Shraddha Kapoor as the latest addition to the band, Magik (from Rock On) and the film will also have the actress crooning for all the songs. The sequel has also retained its entire star cast of Farhan - Prachi, Arjun - Shahana and Purab aka Killer Drama (considering that Luke Kenny's character dies of cancer).