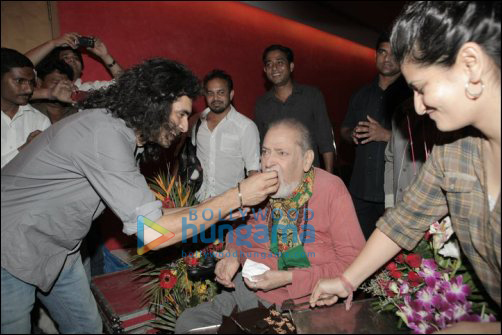 Bollywood legend Shammi Kapoor, who breathed his last on Sunday, August 14, will be seen in director Imtiaz Ali's upcoming film Rockstar. The actor, who passed away due to kidney failure actor, was on dialysis when he shot for the film in Delhi.

The film stars his grand-nephew Ranbir Kapoor in the lead role. This will be the first and last time Ranbir shared screen space with his grand-uncle. Ranbir plays the role of a small-town boy dreaming of becoming a rockstar. The duo will be seen together in a 'jugalbandi' where Ranbir will be playing a guitar while Shammi will play a shenai. Shammi had earlier said that playing shenai had always been his passion and he was happy to show his skills in the film.

Imtiaz felt extremely fortunate to have Shammiji in his film. He says that Shammiji was the true "rockstar" on sets and everyone else including Ranbir were just his attendants.

Here are some pictures of the 'Yahooo' man, Shammi Kapoor, on the sets of Rockstar with director Imtiaz Ali, Ranbir Kapoor and the entire crew of the film.