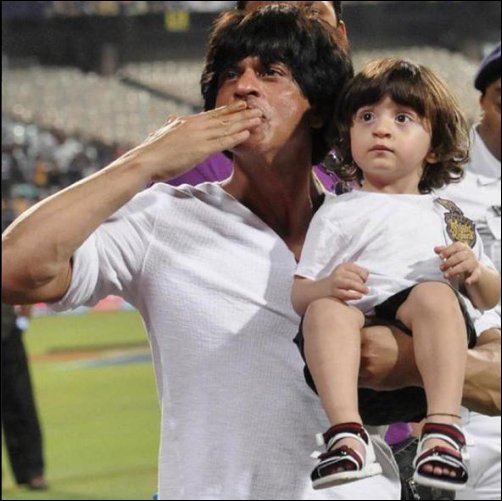 While Shah Rukh Khan and his wife Gauri have never shied away from expressing the happiness the little bundle of joy got into their lives, the actor also seems to be too

thrilled about updating his fans about AbRam's antics. The actor has been sharing a few pictures of his third child, with the recent one being where AbRam is holding a broom. Now we spotted the

adorable duo attending the ongoing season of IPL which was held at Eden Gardens in Kolkata.

This was the first time where we spotted AbRam cheering on the stands with his father for KKR, which is co-owned by Shah Rukh Khan. His adorable smile attracted the attention of all around

including the players and from what we hear; he also attempted to give a hug to the team's captain Gautam Gambhir after they won the match against Mumbai Indians.

On the other hand, it was not just his youngest kid, but his other favourites, eldest son Aryan and daughter Suhana also accompanied their father for the match, where they were spotted interacting

with the superstar about it.