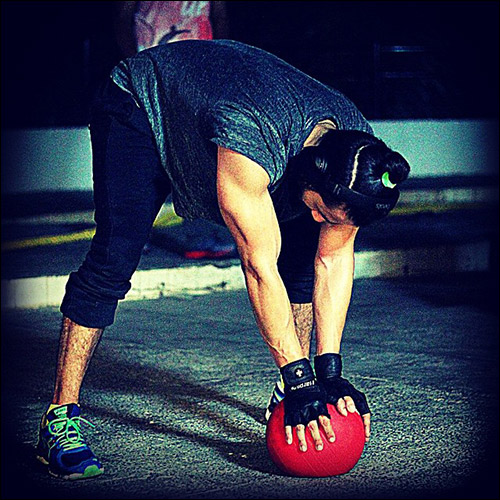 While we spotted an almost bald Shahid Kapoor attending events during the shoot of Haider, the actor is all set to experiment with his look once again. This time around, it is for the Abhishek Chaubey directorial Udta Punjab.

Shahid Kapoor, who is active on Instagram, has been sharing pictures with his long hair look. Tying up his hair in a bun, the actor has been seen indulging in a lot of physical training activities. Shahid posted this picture of him exercising with a gym ball saying, "Outdoor Night training sess . Destroyed !"

He also posted a few other pictures clicked by Rohan Shreshta which has the actor in a long hair avatar. We believe that Shahid is preparing for his role for Udta Punjab, wherein he will be seen sharing screen space with his Shandaar co-star Alia Bhatt and ex-girlfriend Kareena Kapoor Khan.

From what we hear, Udta Punjab is a story revolving around the nexus of drug mafia in the state. Kareena will be paired opposite popular Punjabi actor Diljeet Dosanjh. Produced by Phantom, the film is looking for a January 2016 release.