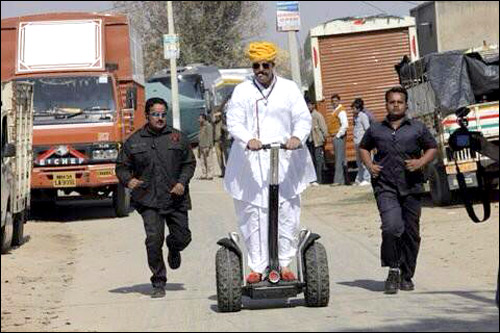 Sanjay Dutt, who has been in the eye of the storm, may currently be away from the limelight. However, the actor's next venture PK that features him alongside the perfectionist Aamir Khan, is gearing up for release next month. While the promotions of the film kick started a few months ago with the release of the film's first look, director Rajkumar Hirani posted an image of Sanjay Dutt on the sets of the film, earlier today.


Tweeting the pictures of Dutt riding a segway, Hirani posted, "In Rajasthan Sanju travelled from the make up van to the sets of PK which was half a km away...on this".


Though we are still unaware of PK's story line, speculations state that the comedy - drama directed by Rajkumar Hirani has Aamir Khan playing the role of an alien. PK also features Anushka Sharma, Sushant Singh Rajput, and Boman Irani in prominent roles and it is slated to release on December 19.