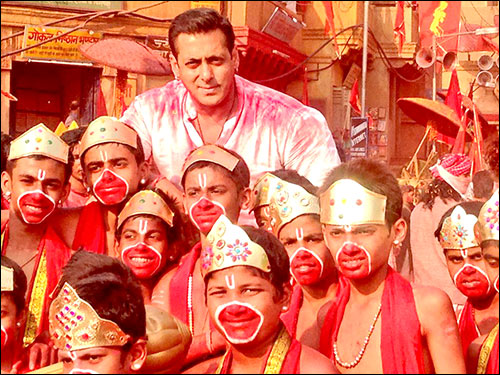 Salman Khan and his love for kids is quite visible from the amount of charity work that the superstar does for children. From his frequent visits to many NGOs to his foundation 'Being Human' providing help for the underprivileged, Salman Khan always makes sure he does his bit for them.

Recently, while shooting for Kabir Khan's upcoming directorial, our Bajrangi Bhaijaan decided to pose with many Bajrangs. Salman Khan was snapped with kids who posed as 'Hanumans' during the shoot schedule of the film. Sharing this picture on her Twitter handle, Kabir Khan's wife Mini wrote, "The amazing energy of @BeingSalmanKhan on the sets of #BajrangiBhaijaan." In the picture, we got a glimpse of Salman Khan, who has his face and shirt dipped in gulaal (pink colour). We also hear that the said picture is a part of a song sequence in the film featuring the superstar as well as co-star Kareena Kapoor Khan. Composed by Pritam, the song is choreographed by Remo D'Souza and it is being shot at Film City. Also, it has been learnt that an elaborate set has been constructed for the song which will have approximately 600 dancers along with this group of boys dressed as 'Hanumans'.